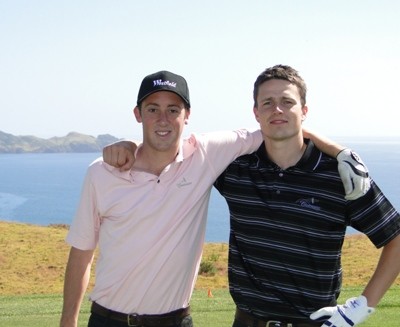 Two young Kiwi lawyers are on the verge of completing their dream run - a year, or 365 days of playing golf on a different course every day around the world.

Wellington golfers Michael Goldstein and Jamie Patton, who are over 200 rounds and 35,000km into possibly the world’s best ever golfing holiday, came up with the idea for the ‘puregolf2010’ project, after deciding they needed a personal challenge.

Along the way, they have also raised NZ$10,000 in donations to The First Tee, a charity teaching youth important life values through golf.

The golf buddies are currently in Scotland, where they have just played at St Andrews, and will be moving on to Northern Ireland and Eire next month.

According to Goldstein and Patton, "Puregolf2010 is a story about the Kiwi ethos. It was born out of a desire to challenge ourselves … puregolf 2010 is, first and foremost, an adventure. It embodies for us the truism that life is too short. Golf every day for a year … why not?"

Random acts of kindness
The golfing pair have been overwhelmed by the warm reception they have received everywhere, and by the kindness of strangers.

Goldstein and Patton have played 18 holes of golf with Doors guitarist Robbie Krieger, and lined up next to former world No 1 tennis player Pete Sampras.

During their stay in the US, the two played a few free rounds at Pine Valley and Merion, two of the most exclusive courses in the world - and were invited to stay at the home of a New Jersey man for five days.

Goldstein’s partner, Gretta O’Connell, told a New Zealand newspaper that she supported the pair in their year-long golfing adventure. She said the men were tired but still going strong.

"I think Michael has a sore back, but they’re pretty fit. It has been tough for them just … arranging somewhere to play every day and having somewhere to stay. They’ve slept in their car a few times, played in the pouring rain and run around the course with just one or two clubs," says O’Connell.

Puregolf2010
The puregolf2010 adventure began in New Zealand on 1 January at the luxury Kauri Cliffs golf resort in Northland.

After an official launch party on 25 January at Canterbury luxury resort Terrace Downs, the golfers spent nearly a month playing some of New Zealand’s well known golf courses. They also attended the NZ Golf Open at The Hills in Queenstown during the last week of January.

Patton and Goldstein's route then moved on to golf courses in Australia, the United States, and the United Kingdom. Their route home will include Europe, Dubai, Singapore, Hong Kong and South Korea.

Profile: Jamie Patton
Jamie Patton, originally from Scotland, emigrated to Christchurch in 2000. He graduated from Canterbury University with a BA/LLB (Hons), and in 2008 moved to Wellington to practise company and securities law.

Patton is a keen sportsman and has played representative hockey, most recently for the national title-winning Wellington A team.

Golf has featured prominently in his sporting life, and Patton is a member of the Miramar Club in Wellington.

He hopes puregolf2010 will provide him with the chance for a career change that could include advertising or journalism.

Profile: Michael Goldstein
Michael Goldstein is an Australian-born Kiwi who has a passion for sport, commerce and travel. He has played competitive cricket - including for the NZ under-19 team - and hockey for many years.

Golf has been a hobby from an early age, initially as a member of Russley Golf Club in Christchurch, then more recently at Clearwater Resort.

Goldstein has an LLB (Hons)/BCom from Canterbury University, where he was also president of the students’ association. He has been an active member of the university council and a director of online recruitment website Student Job Search. In February 2009 he began work as a lawyer in Wellington.

He describes puregolf2010 is "a once-in-a-lifetime opportunity" and a challenge that he’s determined to conquer.