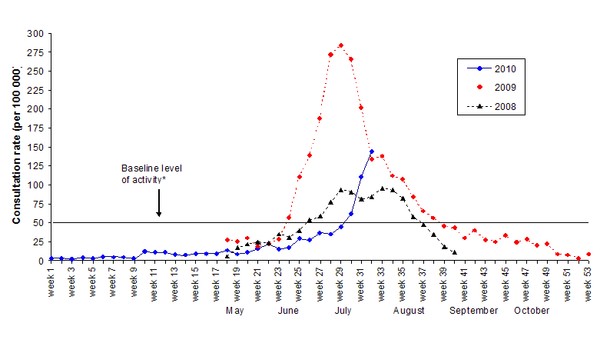 Influenza H1N1 activity is continuing to increase, and the Ministry of Health is now providing twice-weekly updates.

As at 8am this morning, there have been 454 hospitalisations of lab-confirmed pandemic influenza H1N1 this year to date in New Zealand, including 14 people currently in intensive care with confirmed H1N1. There have been a total of 67 admissions of confirmed H1N1 to intensive care so far this year. These figures do not include influenza-like illness among people admitted to hospital without a positive H1N1 lab test result.

Pandemic influenza H1N1 is the most common strain of influenza circulating in the community, although most people will not be tested for it. For the majority of people it's a mild to moderate illness, but for some it can be serious.

There continues to be strong uptake of recommendations to seek medical advice early. Healthline handled over 2000 calls from people with influenza-like illness last week. Call volumes are running at around the same rates they were at this time last year during the pandemic. Calls requiring an assessment of influenza-like illness made up about a third of all calls during the last week.

GPs are continuing to see increasing numbers of people with influenza-like illness. In the last week there was a notable increase in the number of pre-schoolers being seen by GPs. If you have flu-like symptoms, phoning your GP first before you go in can help them manage your care and prevent spread to others.

Overall, schools are reporting routine levels of children being away from school due to illness, however this has been varying across the country and communities.