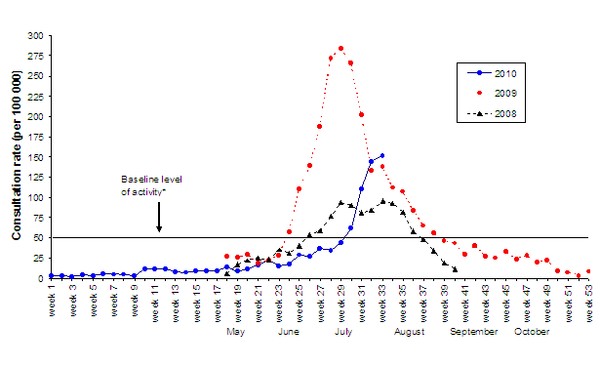 Influenza H1N1 activity is continuing across the country, with variable rates of infection according to geographic region. Hawke's Bay has been experiencing the highest rates of influenza-like illness, with many people visiting their GP. Recent information suggests that some regions may be starting to see a decline in influenza activity, especially in the North Island where most activity has been occurring, however it is too early to tell whether this definitely the start of a downward trend.

As at midday today, there have been 583 hospitalisations of lab-confirmed pandemic influenza H1N1 this year to date in New Zealand, including 13 people currently in intensive care with confirmed H1N1 (in intensive care at four hospitals in the North Island and two hospitals in the South Island). So far this year, there have been a total of 91 admissions of confirmed H1N1 to intensive care. These figures do not include influenza-like illness among people admitted to hospital without a positive H1N1 lab test result.

Pandemic influenza H1N1 is the most common strain of influenza circulating in the community, although most people will not be tested for it. For the majority of people it's a mild to moderate illness, but for some it can be serious.

So far this year there have been fifteen deaths reported as linked to swine flu. Eleven of these deaths have so far been confirmed as being due to swine flu. The five deaths reported since Monday's (23/8) update occurred in the Auckland and Waitemata DHB regions. Further information on these cases is available from Auckland and Waitemata DHBs websites.

It's important to seek medical advice early - particularly for people with underlying medical conditions or who are severely overweight or pregnant as they are at greater risk of a more severe illness. If you have flu-like symptoms, phoning your GP first before you go in can help them manage your care and prevent spread to others. For health advice at any time, call Healthline 0800 611 116.


Protecting yourself and others

For some people, influenza can be a very serious illness. The basic measures to protect yourself and others remain the same, but are more important as we see more influenza circulating in the community:
Know the symptoms of influenza, which can include a high fever, headache, cough, sore throat, tiredness and generally aching all over.

Phone for medical advice quickly (call your GP or Healthline on 0800 611 116) if you have influenza-like symptoms, including consideration of whether you need antiviral medicine treatment. Antiviral medication may lessen the severity and length of your illness, but is best started within the first 48 hours. Antiviral medication is currently available free of charge for people who are prescribed it for influenza treatment.
Seeking early medical advice is especially important for women who are pregnant, severely overweight people and those with underlying medical conditions such as asthma, diabetes, cancer, heart and lung disease and other conditions including autoimmune diseases.

Wash and dry hands frequently, cover coughs and sneezes and stay home if you are sick.

Over 1,045,000 doses of seasonal influenza vaccine have been distributed so far in 2010. If you've haven't yet been immunised, book in to get immunised now, as it takes up to a fortnight for the vaccine to offer its full level of protection. Young children need a longer time as they require two doses a month apart to be assured of best protection. Immunisation is especially recommended for those at greatest risk of complications from H1N1 influenza, including women who are pregnant, very young children, severely overweight people and those with underlying medical conditions.

The Ministry has reached an agreement with Sanofi, who will supply up to 35,000 doses of Intanza for the subsidised influenza immunisation programme. Intanza provides protection against the same strains of influenza as Vaxigrip (the brand which is currently in use) including pandemic influenza H1N1 (swine flu). Intanza is only approved for use in individuals aged 18 to 59 – therefore only individuals with chronic conditions, obese individuals or pregnant women in this age range will be subsidised for Intanza.

Intanza, perhaps best known for its very small needle, is new on the scene this year, and until now has only been available on the private market. Please be aware that, as per our planning, at some stage in the next few weeks warehouse supplies of Vaxigrip will be depleted, making Intanza the only seasonal flu vaccine available for subsidised patients.

More information can be found on the Ministry of Health's Influenza webpages at: http://www.moh.govt.nz/influenza-a-h1n1.