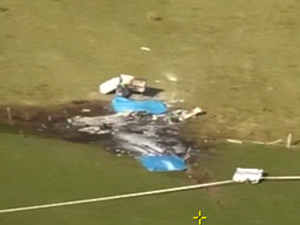 The bodies of five people killed in a plane crash in Fox Glacier this afternoon will remain at the scene until tomorrow.

Police have confirmed nine people died when the plane crashed and burst into flames shortly after take off.

Four overseas tourists were among those killed and the embassies of the overseas victims have been informed.

The tourists were from Ireland, England, Germany and Australia. The other five who died were the pilot and four other men.

A Police Disaster Victim Identification team has been sent to the scene and once the bodies have been recovered they were expected to be taken to Dunedin hospital.

The Fletcher fixed-wing plane hit the ground just before 1.30pm and locals reported seeing a plume of smoke rising into the sky from the local airstrip.

It is believed the plane crashed on take-off and burst into flames. The weather at the time was fine.

Advertisement
Locals said the plane was about to undertake a sky diving flight.

The only skydiving company in the region is SkyDive NZ.

Matt Ewen, general manager of Tourism West Coast told ONE News nothing like this has happened before in the area.

"I know the owners, they are very nice people and this is a tragedy for them. Fox only has about 200 people in the community and it is in shock.

"The operators are very experienced and the company has a very good safety record."

He said Fox Glacier runway has had no issues in the past.

The Prime Minister said this afternoon that his heart goes out to the families of those who were killed at Fox Glacier.

John Key said from Christchurch where he was viewing damage from this morning's devastating earthquake that he has had a brief message from the Minister of Civil Aviation.

Transport Minister Steven Joyce has also extended sincere condolences to the families, friends and colleagues of those aboard the Skydive New Zealand plane.

"The Transport Accident Investigation Commission is leading the investigation with assistance from the Civil Aviation Authority. My office is being kept informed," he said.

"Details remain sketchy and it is too soon to speculate on exactly what has led to this accident occurring.

"In the meantime, my thoughts, and those of my Cabinet colleagues, are with all of those who have been affected by this very tragic event."

Today's crash is the first aviation accident of this magnitude in New Zealand since the Air Adventures accident claimed eight lives in 2003.