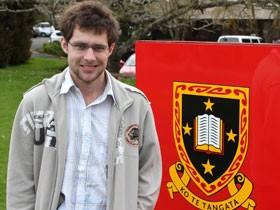 Regan Hughes: The Bachelor of Engineering student received two scholarships to help with his studies at Waikato University. CREDIT: University of Waikato

With a Bachelor of Engineering set firmly in his sites, former Otumoetai College student Regan Hughes was fairly confident the University of Waikato would be his home for the next four years.

But receiving $7000 in scholarship money at the end of last year sealed his decision. He said it was a huge boost to his plans and has helped pave his way through this first year at university.

“It’s crazy but not many students bother applying for these scholarships. It’s definitely worthwhile. You don’t realise at the time, but once you leave home, money becomes really important,” says Hughes.

Hughes received two scholarships: the University of Waikato school leaver scholarship which is worth $3000 and is dependent on students achieving New Zealand University Entrance and receiving 70 credits in level 3 NCEA; and the Bachelor of Engineering Fees Scholarship, which pays fees for one year up to a total of $4000. The BE Fees Scholarship is awarded to students based on academic results, leadership potential and involvement in sporting and community activities.

“If you see a scholarship that’s relevant to your area of study you might as well apply. You’ve got nothing to lose,” he says.

Having always had a leaning towards science, Hughes was completely sold on engineering two years ago when he attended a careers expo.

“I could see the combination of science with a practical application and that grabbed me,” he says. At the moment, he’s deciding whether to follow a mechanical or chemical engineering path following his first year, which has been more generalist.

In the meantime Hughes says he’s relishing this first year, especially being in the Halls of Residence which he says is a good transition between leaving home and going flatting. He’s in Student Village which is one of four different accommodation options the University offers on campus.

“There’s a huge variety of people in the Halls and everyone’s generally in the same situation as you. I’ve met some really great friends and there’s always some sporting or social event being held that we take part in.”

Most recently students slug it out in an inter-halls basketball competition, but he says it was “purely social and lots of fun.” And when they’re not hitting the study books, Hughes says the hot topic being debated at the moment is who’s flatting with who next year.

If you would like more information about the scholarships offered by the University of Waikato, have a look at the website: www.waikato.ac.nz/study/money/scholarships.shtml.