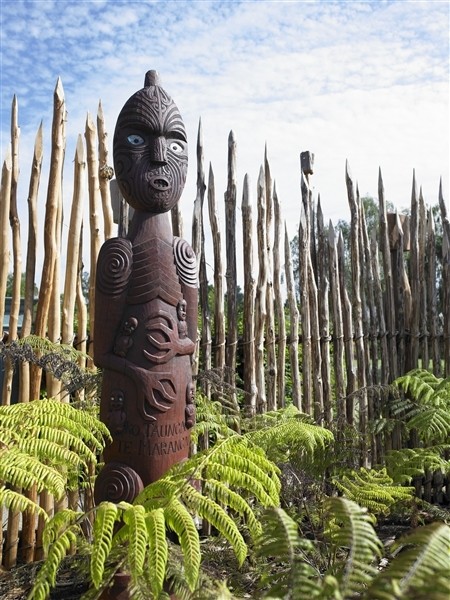 As part of the Productive Garden Collection at Hamilton Gardens, Te Parapara was officially opened in 2008 by His Excellency Anand Satyanand and Te Arikinui Tuheitia Paki, the Maori King. However, December's unveiling will open an area housing a number of precious artisan carvings which were previously inaccessible to the public.

In the intervening years a number of delicate works have been undertaken with painstaking detail to remain in keeping with age-old Maori traditions, including the built and carved structures of a rare palisade fencing (taepa), three forms of traditional Maori storehouses (pataka), a ceremonial gateway (waharoa) and ancestral pou.

Focusing on the plants, techniques and culture associated with pre-European Maori horticulture, food gathering and food preservation and storage, Te Parapara sits alongside the Sustainable Backyard, the Kitchen Garden and the Herb Garden in the Productive Garden Collection at Hamilton Gardens.

Te Parapara’s design is comprised of traditional carvings created by artisan local carvers and plants with cultural significance. It tells the story of the establishment of cultivated food crops in the Waikato, from the landing of the Tainui waka to the era of the expansive plantations in which local Maori excelled as productive gardeners.

Iwi advisor Wiremu Puke says, “This garden is going to be unique. There is no other garden like this that preserves the traditions and material cultural knowledge with this level of integrity. It’s also an acknowledgement of the ancestors who cultivated these riverside terraces over many centuries up until the 1863 Waikato Land Wars.”