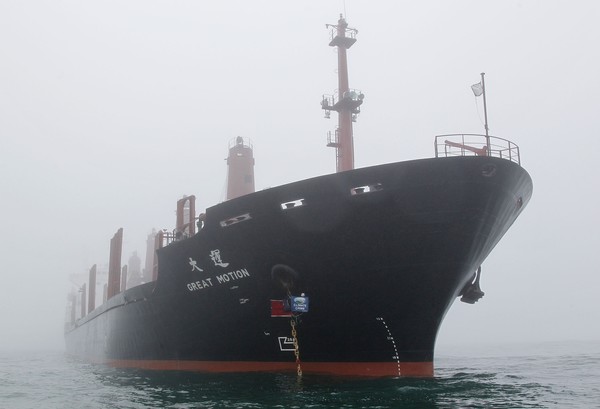 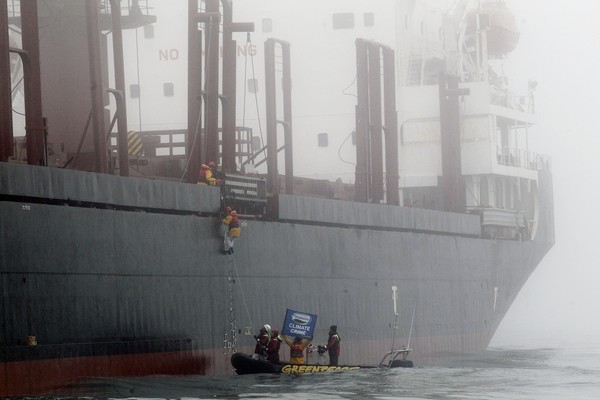 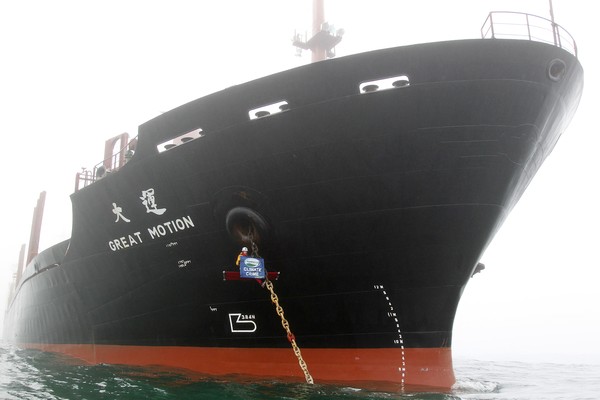 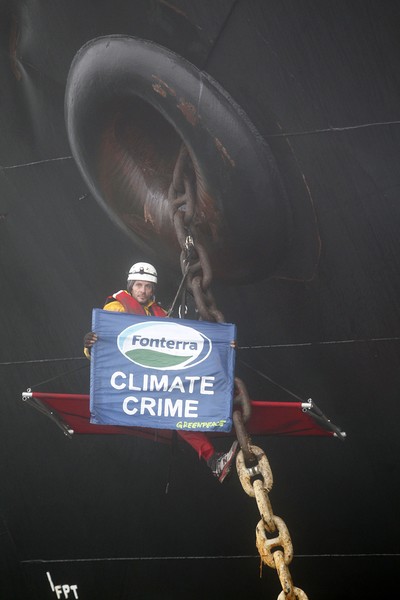 Greenpeace activists have this morning boarded a shipment of palm kernel to prevent it from being unloaded at Port Taranaki, New Plymouth.

One activist is on the ship’s anchor chain.

Another four are occupying the ship’s cranes.

The MV Great Motion has 10,000 tonnes of palm kernel on board.

It is at anchor just outside the Port, where it had been waiting for another ship to unload its palm kernel and depart a berth used for unloading the animal feed.

The action is being carried out to force the Government to put a stop to Fonterra’s expanding use of palm kernel (also know as palm kernel expeller), which is typically grown on land cleared of rainforest, which often includes orang-utan habitat.

Palm kernel linked to deforestation and peatland destruction poses a significant risk to New Zealand’s economy, as it undermines this country's international clean green reputation, because of its impact on the climate, and rainforests. Reliance on supplementary feeds like palm kernel commits New Zealand to a dairying model that is completely unsustainable.

“Why is the Government not doing something, when Fonterra has effectively admitted that the vast majority of their palm kernel is unsustainable (1),” says Greenpeace New Zealand Climate Campaigner Nathan Argent.

“The Government is failing New Zealand and the world by not taking Fonterra to task over the economic and climatic damage done by the company’s use of palm kernel in New Zealand, and by Fonterra’s industrialized approach to dairying. Palm kernel imports linked to deforestation and peatland destruction must be stopped immediately,” says Argent.

Palm kernel imports are soaring, hitting a record high of almost 1.4 million tonnes during 2010, for which Fonterra is estimated to have paid a quarter of a billion dollars, according to Statistics New Zealand. This represents almost a third of the global trade in PKE (2).

Palm kernel shipments are literally lining up to come into the country – with a total of three shipments through Port Taranaki this week alone – a cargo of 31,000 tonnes.

“Time is running out for Fonterra and the Government. If both continue to refuse to act, then Fonterra’s international consumers will likely take action of their own accord. Consumers around the world are increasingly interested in the climate and environmental impacts of the products they buy,” Argent adds.

Tropical forest destruction is responsible for around a fifth of global greenhouse gas emissions (3).

Supplementary feeds like palm kernel are a key part of Fonterra’s industrial farming approach, which is increasing climate emissions.

“Fonterra’s claims that palm kernel is sustainable are false. Only six per cent of the global production of palm products is grown according to the standards of the industry body, the Roundtable on Sustainable Palm Oil, which are not strong enough,” Argent says.

Feeding stock on pasture, using locally grown emergency alternatives to palm kernel (such as maize silage), and moving from the current industrial farming model to low impact practices, are the best options for reducing greenhouse gas emissions, and protecting our international brand.

In August 2009 a team from Greenpeace New Zealand travelled to Indonesia to document the destruction being done by the palm industry there. Later the same year Greenpeace stopped a shipment of palm kernel in Tauranga, and painted a message on the side of another palm kernel ship in New Plymouth. In September 2010, Greenpeace returned to Indonesia to gather evidence of how the palm industry was opening up new frontiers of destruction. This evidence was later delivered directly to Fonterra's headquarters in Auckland, and to politicians in Wellington.

A palm kernel question and answer document can be found here: