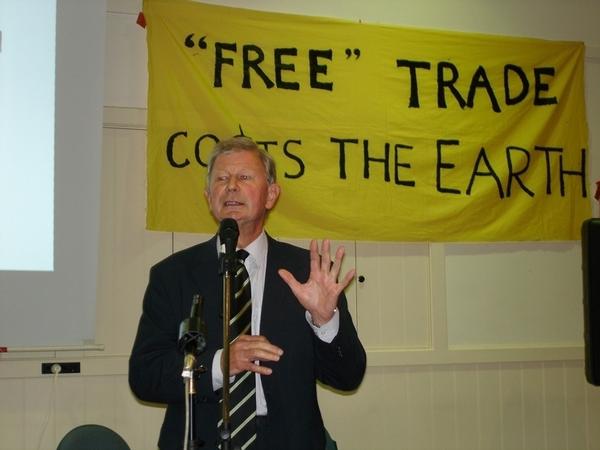 Bryan Gould, the well known economic commentator and author, former Vice-Chancellor of Waikato University and senior British Labour MP, has accepted the invitation to become Patron of the New Zealand Not For Sale Campaign CREDIT: Campaign Against Foreign Control of Aotearoa

Bryan Gould, the well known economic commentator and author, former Vice-Chancellor of Waikato University and senior British Labour MP, has accepted the invitation to become Patron of the New Zealand Not For Sale Campaign, a network of groups formed to fight the Tran-Pacific Partnership Agreement (TPPA), which is currently being negotiated in secret (for full details of both the proposed Agreement and the Campaign, refer to our Website, address below. In a nutshell, it provides the means to effect a Free Trade Agreement with the US).

Upon accepting the invitation, Gould said: “Keeping control of our economy is an important aspect of being a self-governing country. Foreign investment in our economy is welcome in many cases, but selling off assets wholesale into foreign ownership means not only that we lose the benefit of our own wealth-producing capacity, so that we become mere tenants and wage slaves in our own country while others take the profits. It also means that, while we have the appearance of democracy, the real decisions affecting our future are taken in foreign boardrooms. It is time we woke up to these dangers before it is too late. Why should we cede yet more control over our economy – allowing foreign corporations to enforce rights against our Government that are not available to our own firms – in pursuit of much greater access to the American market for our dairy products that the US dairy industry will never allow?”

The Campaign is delighted to have somebody of Gould’s standing on board.

As for the proposed TPPA, the next round of secret negotiations is in Chile next week. And, to coincide with the Christchurch Forum of the US/NZ Partnership Council, the Campaign is holding a teach-in on the TPPA in Christchurch on Sunday February 20th. The speakers are: Murray Horton, from the Campaign; CTU Economist Bill Rosenberg and Auckland University academic, author and activist, Jane Kelsey. Full details are on our Website.