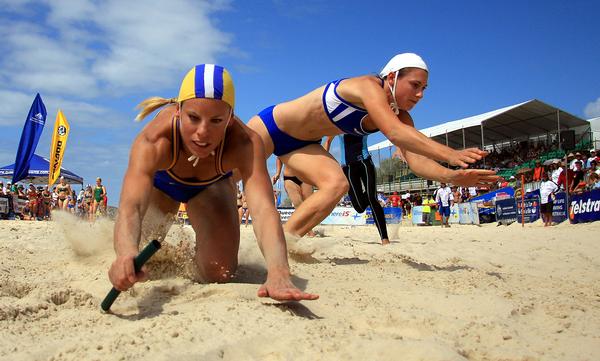 The Australian star will join her Kiwi partner Paul Cracroft-Wilson for the three-day championships beginning on Friday, anxious to get some decent racing under her togs.

"I was disappointed to miss the International Surf Challenge in Mount Maunganui last month and there's been a lack of decent races over here in Australia this year," Howard said. "I was looking for a good hit-out before the Queensland state title and next month's Australian championships so I'm pretty excited to get the chance to race this week."

Howard, who won the world title in Egypt last year, is also keen to support Fitzroy's Cracroft-Wilson who joined her in picking up world championship gold in 2010. The pair train together at Queensland's Kurrawa club, which is also the adopted home of top Kiwi women sprinters Chelsea Maples and Chanel Hickman.

Maples, who won the world beach sprint title in Egypt, will compete for Mount Maunganui this week for the first time since last year's national championships in Ohope, while Hickman looms as a major threat to Howard in the flags.

One interested spectator will be New Zealand coach Scott Bartlett, who was reappointed to the national role this week.

"With Melissa here, it means we've got the best male and female beachies in the world competing and it will really lift the level of competition," Bartlett said. "It will be interesting to see how the likes of Chanel and Chelsea go against her. We've got great depth throughout most events, not just with high performance squad members but also with former champions coming back and there aren't too many top names missing."

The championships were switched to Mount Maunganui two weeks ago after the Christchurch earthquake, with nearly 1200 lifeguards attending, beginning with tomorrow's masters competition.