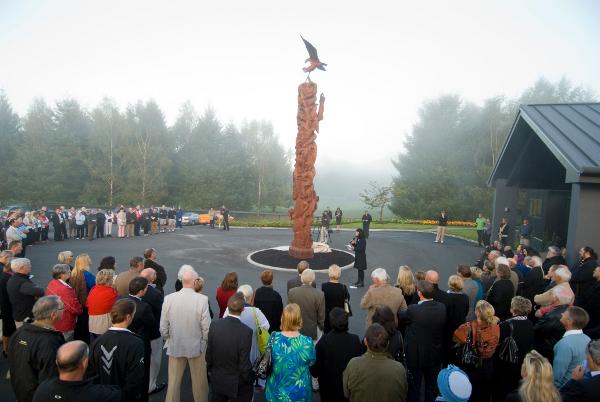 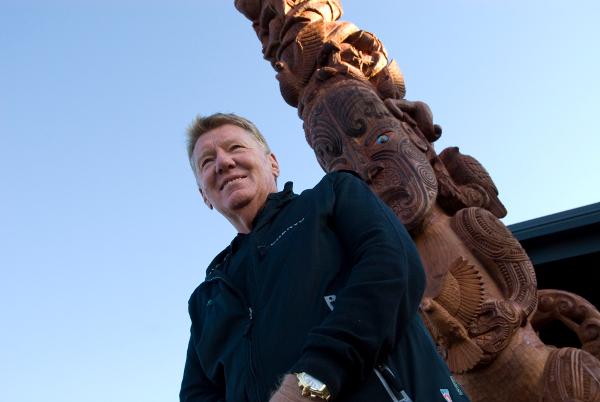 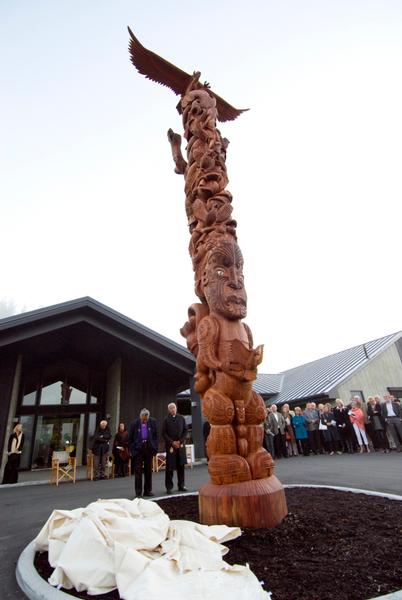 Blessing of an imposing nine metre high Pouwhenua at the entrance to the Wairakei Golf Course CREDIT: Cam Feast

More than 150 invited guests attended a dawn ceremony at Wairakei, near Taupo today (Friday March 11) to mark the opening of a unique sanctuary within the confines of the privately owned 18-hole Wairakei Golf Course.

A feature of the ceremony was the blessing and unveiling of a nine metre high Pouwhenua (Maori carving) at the entrance to the golf course. The official opening of the ‘Wairakei golf + sanctuary’ was timed to co-incide with the NZPGA senior championship which started at Wairakei on Thursday March 10 and runs for the next two days. All proceeds from the tournament will go to the Breast Cancer Research Trust. (BCRT) Special guests at today’s ceremony included BCRT ambassador Carol Hirschfeld, Taupo MP Louise Upston and Mayor Rick Cooper.

Physical work on the multi-million dollar sanctuary project got underway 18 months ago with construction of a two metre high predator fence around the perimeter of the 180 ha property. The five kilometre long Xcluder fence is designed to keep out predators like rats, mice, stoats, weasels, hedgehogs, feral cats and possums. The golf + sanctuary project is believed to be the only one of its kind in the southern hemisphere.

Around 25,000 native trees and five thousand exotics have been planted to encourage bird life and further enhance the park like surroundings. Two hundred mixed colour pheasant have also been released on to the golf course property.

A small herd of around 15 fallow deer and a stag are being reared within a deer fenced area. Discussions are also underway with conservation agencies regarding the eventual release of some endangered species – like kiwi and brown teal.

Wairakei golf + sanctuary owner, Auckland businessman Gary Lane told guests that the sanctuary project had been a “labour of love” that was inspired by an article he had read that said 90% of ground breeding birds were likely to be killed by stoats, weasels and other predators.

He said Wairakei was “an iconic piece of land” and the vision was to try and preserve the environment for the future.

“It can only get better,” he told guests at today’s opening.

“It is great to be Mayor of a district that is making progress and evolving – aided and abetted by people like Gary Lane,” he said.