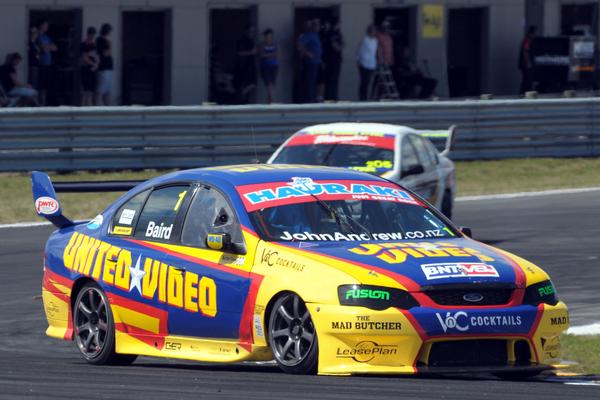 Championship slide for Baird in V8s

Defending NZ V8s champion Craig Baird MNZM had a nightmare run at the weekend’s penultimate round of the 2010/2011 series held at Taupo – dropping from second to fourth in the standings.

Having good pace in the United Video Racing Ford Falcon around the 3.5 kilometre circuit, even a qualifying result of fifth was a sign the weekend could worsen.

Getting a good start in the opening ten lap race, Baird was hit heavily on the run to the first turn, pushing him out of a chance to improve his placing. By the chequered flag the had improved to sixth place, but the placing dropped him down the championship order to third.

Starting from sixth and the outside on the run to the first turn in the weekend’s second race, Baird was squeezed even further when a competitor pushed up the middle, shuffling the defending champion down to ninth in the opening lap. With improved car speed, Baird was able to put moves on for two positions by the third lap, including a pass on series leader Angus Fogg. Gaining on his earlier woe, Baird returned to sixth when the chequered flag came out.

Hoping for a shift in fortune for the weekend’s final and reverse grid race, Baird was mid-pack when gearbox failure at the starting light halted any further progress.

“We thought we had the weekend lined-up. And to be fair it was just one of those weekends as far as what happened. I can’t tell you why we haven’t been fastest either. I’m not sure if it’s me, the car, or a combination. We’ve made changes – that came to nothing when we DNF’ed the final race. So that’s motor racing isn’t it?” a philosophical Baird stated.

“And I guess when you’re not starting from the front you get amongst the weekend warriors – which will always count against any luck you may have. To now be 62 points behind really taints the team’s efforts.”

With five weeks until the series final, Baird’s United Video Racing team focus is getting to the finish of the Hamilton 400 V8 Supercar street race weekend. Known for his craft bounded by concrete walls, Hamilton is also a home-coming weekend having grown up there.