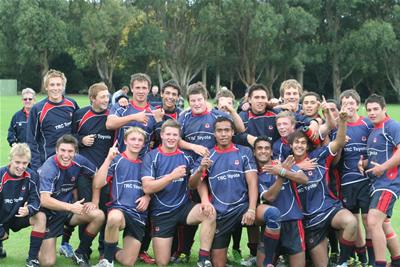 The annual Manawatu/Horowhenua Tournament doubles as a qualifier for the Condor Sevens tournament in Auckland on December 4 2011.

Feilding will join 13 other schools in Auckland in December for the right to be crowned the New Zealand Secondary School Sevens champion and with one eye on the Olympic Games in Rio 2016 where the sport makes its debut.

Palmerston North Boys’ High School started strongly in the final scoring two quick tries in front of a good crowd at Ongley Park. Feilding spread the ball wide using their speed to strike back to lead 17-10 at half time. In an exciting second spell Boys’ High locked the scores at 22-22, Feilding scored two late tries to secure the win 36-22 and book a spot at the National finals.

Feilding Captain Jamie Perigo said that the regional competition gave his players a chance to show their skills in the shortened version of the game and they will look to emulate the 2004 side, who featured All Black flanker George Whitelock and Highlanders flanker Nick Crosswell and finished runners-up to Mount Albert Grammar School, when they head north in December.

“A special mention goes to all of the Manawatu Rugby Referees who gave their time to officiate the event for the day as well as Chris Ricketts from the Manawatu Rugby Union who re-established the event to its current state to create a new exiting opportunity for secondary school rugby players,” says Mr Koch.