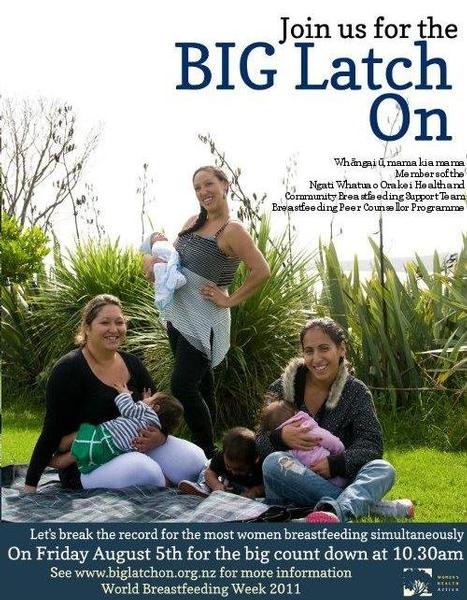 Can we break the record??

During the first week of August over 170 countries worldwide will celebrate World Breastfeeding Week. Last year more than 500 World Breastfeeding Week events took place globally involving more than 800,000 people. In New Zealand, Women’s Health Action Trust is coordinating the annual “Big Latch On”, and at 10.30am on the 5th of August we will attempt to break the record for the most number of women breastfeeding simultaneously in Aotearoa New Zealand.

The Big Latch On will be turning seven this year and each year has seen increasing involvement and support for the event from communities large and small around New Zealand.

The Big Latch On celebrates breastfeeding mums and babies and promotes the benefits of breastfeeding for babies, mums and society at large. It is a great opportunity to get community recognition and support for breastfeeding women. Last year we broke the Big Latch On record with 1514 babies latched on and breastfeeding simultaneously throughout New Zealand; we are aiming to once again break this record. We already have over 120 venues registered throughout the country, from Kaitaia all the way down to Invercargill!

Women’s Health Action is committed to protecting, promoting and supporting breastfeeding. Activities that support breastfeeding in the community contribute to the long-term health of the population and help to reduce health inequalities between population groups. Breastfeeding has a positive influence on the health status and social wellbeing of baby, mother, family/whanau and community. The World Health Organisation recommends infants should be exclusively breastfed for the first six months of life and continued alongside the introduction of safe complementary foods for up to two years of age or beyond. New Zealand has high breastfeeding initiation rates; however there is a steep decline in breastfeeding rates after the first six weeks. Efforts are needed to normalise and increase support for breastfeeding in the community.

For more information about participating in the Big Latch On or coordinating a venue go to www.biglatchon.org.nz