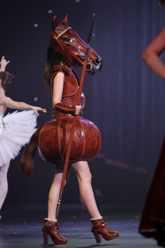 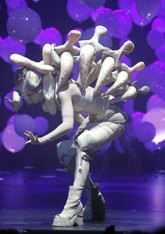 'Hide in My Bone Shadow' by Marjolein van der Wal (The Netherlands) - Runner Up to the Supreme Award winner at 2011 Brancott Estate World of WearableArt Awards. CREDIT: Tourism NZ

A breath-taking kaleidoscope of colours, fantasy and creativity unleashed a unique artistic spectacle at New Zealand’s World of WearableArt show which opened in Wellington on Friday (26.08.2011)

There’s no other show quite like this anywhere in the world, and international designers were to the fore at the gala awards night - the first of an extended 14-night season - taking away the two top awards.

Mary Wing To’s Hylonome representing the mythological centaur - half human, half horse - was described as "a labour in leather and of love" by WOW founder and judge Suzie Moncrieff.

The 28-year-old Manchester-born designer, who is based in London, won more than NZ$20,000 in prizes for Hylonome which was made from 200 metres of leather, cord and horsehair.

It is the third year in a row that an international designer has won the Supreme Award.
Show organisers said around 30% of the 160 entries showcased at this year’s Brancott Estate World of WearableArt (WOW) show came from overseas designers.

Entries were received from India, Netherlands, China, US, UK, Canada, Philippines and Italy, and 14 of the 35 awards presented were awarded to international designers
In the 23 years that WOW has been running, the fashion art and theatrical spectacle has grown from a humble backyard competition to a global phenomenon that’s now recognised as one of the leading wearable art shows in the world.

At the end of Friday night's show, British actor and media personality Stephen Fry - who is in New Zealand filming for The Hobbit - tweeted: "Wow, in every sense. Just attended one of the great evenings of my life. Kiwis should be so proud. Simply fantastic."

Hylonome - which won both the Brancott Estate Supreme WOW Award and first prize in the Tourism New Zealand Avant Garde section - was "a phenomenal representation" that demonstrated the creator’s multiple skills as a fashion designer turned saddler, Moncrieff said.

"She has used various leather crafting techniques; the entire garment is hand-crafted and hand-laced together, using 200 metres of leather lace. Even the horse’s head is hand moulded in leather. It is absolutely beautiful close up, from afar, and in performance.
Mary Wing To has entered five garments into WOW since 2008, and won the 2009 international award with Saddle Up.

Wing To’s passion for leather craft inspires her fashion - an art that she continues to master at the Royal Mews where she works under Queen Elizabeth’s master saddler and harness maker.

"Leather is an incredible luxury material to work with," she says.
"It has unique scars of beauty embedded for life so no one piece is the same. For me, no other material feels, looks or has a distinctive quality aroma like it. The beauty in working in such a raw process is that you learn to expect the unexpected - that is why I’m so fascinated and constantly thrive on it.

First-time contestant Marjolein van der Wal, of Amsterdam, won the Supreme Runner-up award with Hide In My Bone Shadow - entered in the Geni -i Creative Excellence Section: Under The Microscope.

She says the design is built up out of organised bone-like shapes, and it functions like exoskeletons in insects.

"Born from the desire for protection, this costume provides a barrier, an armour, muting the external sense stimuli and giving a feeling of security," van der Wal said.

"The story tells about deception; the insect woman with two faces gives distraction for protection. Also, the armour looks secure but the inside is soft and light.

Suzie Moncrieff described Hide In My Bone Shadow as "a strong sculptural piece".

"This garment has a strong stage presence, strong colour palate and shows an amazing use of material," Moncrieff said.

Van der Wel - who has ambitions of designing for Lady Gaga - says she likes to create an atmosphere with her work, focusing on the shape and being inspired by the flexibility and opportunities textiles present.

Other winning international entries came from Canada and the United States.

WOW veteran and costume fabricator Sean Purucker, of California, received awards for three entries: winner of the Children’s section (Pretzella), second in the American Express Open section (Lucid Epiphan), and second in the Shell Sustainability Award (Steamy Affair).
Purucker, who grew up in Alaska, makes "little wire people" and sculptures for a hobby.

In the 2011 edition of WOW, audiences are transported into a world of fantasy and surrealism reminiscent of the work of Italian film master Fellini.

During Rugby World Cup and the REAL New Zealand Festival, eight iconic garments from the World of WearableArt collection will appear in eight regional destinations.

The WOW Icons on Tour exhibition will show a garment that relates to the destination along with a painting by a significant New Zealand artist that adds another level of story-telling to the piece.