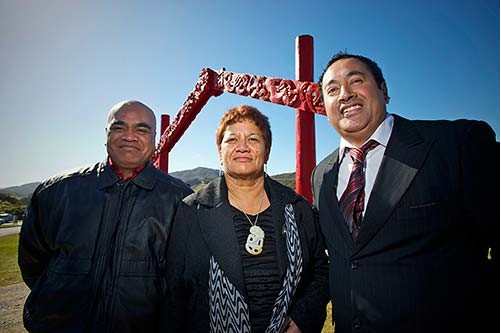 The carved gateway (waharoa) at the entrance was unveiled and blessed. The gateway carvings were designed by Taranaki carver Bryce Manu, who has many carvings around Wellington and along the Petone foreshore. They were carved over 12 weeks by three prisoners from the Māori Focus Unit at Rimutaka Prison, led by carving teacher and Corrections officer Kereopa Wharehinga.

Wellington City Council Cultural Advisor Billie Tait-Jones says the idea has been taking shape over several years. It started with a conversation between Cemeteries Manager Jeff Paris, Parks and Gardens Manager Paul Andrews and Treaty Relations Manager Nicky Karu and developed in consultations with local iwi, mana whenua, kaumātua and the Department of Corrections. The result is a special resting place for Māori who choose to be buried in Wellington.

She says Makara Cemetery has long provided burial grounds for many ethnicities and faiths, but did not have a place set aside for Māori. This urupā now provides that choice.

The motifs acknowledge the ancestors, people and landmarks of those regions. The wheku (carved heads) at the feet of the manaia (full-bodied figures) symbolise kotahi te reo (one voice / language). The three prongs at the end of each maihi represent the fingers of the kaitiaki (caretakers) Ue Poto and Tāpai Whakarongo Wānanga.