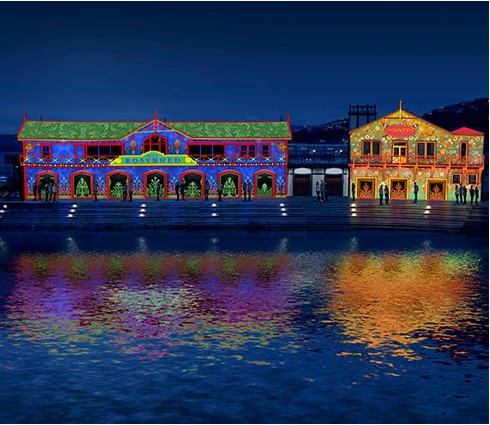 Artist's impression of the waterfront transformed with light and colour by Illuma CREDIT: Wellington City Council

Prepare to see Wellington's waterfront transformed with light and colour when the highly anticipated light projection show Illuma kicks off this Friday (23 September).

The Festival of Carnivale is delighted to work in partnership with the REAL NZ festival. Every night Illuma is set to run from 7.30pm - 10.30pm until Sunday 9 October. The show will run on a seven-minute loop.

Iconic buildings on the waterfront, such as Te Papa and The Boatshed will be the canvas for this specially commissioned work by Auckland-based Inside Out Productions.

The show has been designed by Director Mike Mizrahi, in collaboration with Australian-based company Electric Canvas, which specialises in the field of large-scale projections. They are the company that created the stunning special effects for the recent Rugby World Cup 2011 opening ceremony in Auckland.

Viewers will be treated to a series of optical illusions during the seven minute show.

These will transform the buildings or create interest - for example, iconic images representing each of the countries participating in the Tournament will be projected across Te Papa.

Combining spectacular imagery and state-of-the-art technology, this event will be the centrepiece of Wellington's waterfront activities throughout Rugby World Cup 2011.

So get down there!