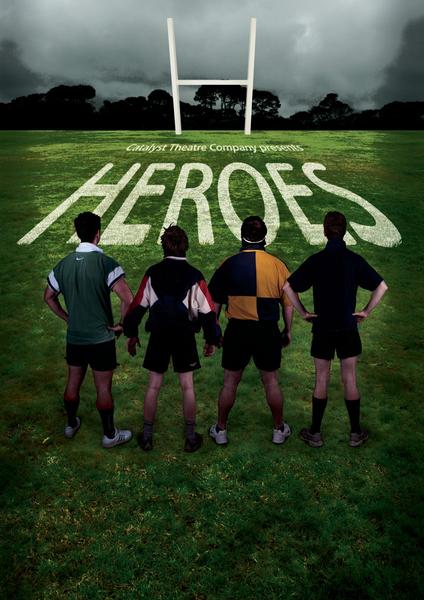 Rugby. It's a game. It has two teams, a funny shaped ball, goal posts, a ref, and a whole lot of rules. But here in New Zealand? It's much more than that. It's a national obsession.

Catalyst Theatre Company presents Heroes, a new play by Jonathan Hodge, at the Maidment Theatre from 23 September to 1 October as part of the REAL New Zealand Festival 2011.

Heroes follows five friends and rugby teammates as they camp overnight outside a stadium to secure last minute tickets to the World Cup final. As they wait we begin to understand what it is about rugby that holds these friends together, and pushes them apart.

There’s Wayne – who very nearly became an All Black himself if it wasn’t for a freak injury; Joe – who is more interested in being a celebrity than a talented sportsman; John – the baby of the team who is still trying to fit in; David – who has chucked in rugby to pursue a career in medicine; and Richard – the tough Southern man.

As dawn approaches and they prepare to join the nation in cheering on the boys in black, the men must face their own battles. Victory doesn't come without a price, but triumph is the only option for those who stand up like heroes.

Catalyst Theatre Company, a collective the NZ Herald dubbed as “energetic and enterprising”, formed in 2007.  They continue to create adventurous and original theatre for younger generations. Their last shows Flightless Birds and TWACAS received rave reviews.

“Generally I’m not one to rave, but Flightless Birds is flawless” – Theatreview

Heroes plays at the Maidment Theatre from 23rd September - 1st October. Shows Tuesday to Saturday start at 8pm, except for Saturday 24th September which is at 6. 30pm (so you don't miss New Zealand play France).