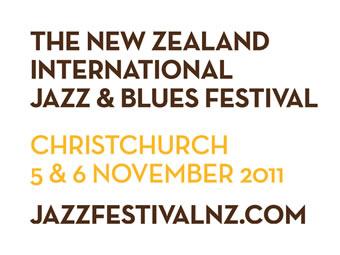 Jazz in the Park

Music lovers in need of a jazz “fix’’ will get just that when some of the best jazz and blues talent in New Zealand descends on Christchurch in early November.

They are coming to take part in a special weekend of jazz at the Hagley Park Events Village on November 5 and 6.

“As everyone knows we had to cancel the New Zealand International Jazz & Blues Festival this year because of the quakes, but we didn’t want people to miss out completely.

"We were determined to do something to bring a bit of jazz back into people’s lives and came up with this idea of having a mini New Zealand International Jazz & Blues Festival in Hagley Park to kick off New Zealand Cup & Show Week," says festival director Jodi Wright.

Over the two days of Taste Jazz/Taste Blues 12 bands will perform at the events village - and most of the performances will be free thanks to the generosity of sponsors such as Cavell Leith Law, the Christchurch City Council, the Canterbury Community Trust, the Lion Foundation, Pub Charity, and Southern Trust.

The festivities will kick off at 11.30am on Saturday, November 5, with Taste Jazz, which will feature great jazz grooves from the likes of the Christchurch Youth Orchestra, Nola Mills and the Tom Rainey Quartet, Sumo Jazz, and the Reuben Bradley Quartet, which won the 2011 music award for Best Jazz Album.

In the evening jazz chanteuse Jennine Bailey will perform a very special Tribute to Ella Fitzgerald concert in the Hagley Park Events dome. Tickets for this evening concert are available for $25 from DASH tickets.

On the Sunday Christchurch’s blues stalwarts will occupy centre stage, with performances from One Foot in the Blues, Jon Hooker and Billy Vallance, Runaround Sue, Midge Marsden and the Harry Harrison Band, and others.

"It’s going to a fun weekend and a great opportunity for people to relax and unwind after a very stressful year," says Ms Wright.

"They can get jazz fix and hopefully that will keep them going until the 2012 New Zealand International Jazz & Blues Festival in mid-April."

The programme for the full festival is still being finalised but will feature a special tribute concert to the music of Duke Ellington, presented by James Morrison and the Christchurch Jazzharmonic Orchestra, conducted by Tom Rainey. Tickets for this April 14 concert at CBS Arena are currently on sale through Ticketek.