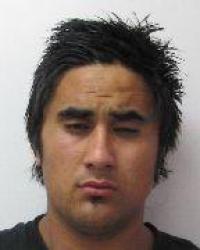 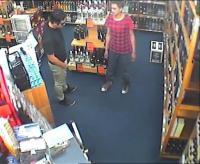 Do you recognise the man in the red shirt/ If so Police want to hear from you CREDIT: New Zealand Police 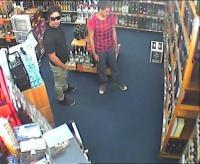 Who is the man in the red shirt? CREDIT: New Zealand Police

Cambridge Police investigating an incident in the town on Tuesday afternoon that left a liquor-store manager seriously injured.

The 59-year-old local man suffered his injuries while trying to stop the occupants of a car, who had earlier stolen bottles of alcohol from his store, fleeing the scene about 4pm.

Detective Scott McDougall of the Waipa CIB said investigators had made good progress on their case and identified one man in relation to the incident.

"A warrant to arrest has been issued for 20-year-old Hamilton man, Levi James NEWPORT, and we are seeking information from the public on his whereabouts.

"Security camera footage taken in the Liquorland store shortly before the incident has also identified a second person of interest, known to us only by the name of 'Devon'."

Mr McDougall said Devon is shown on the security camera footage standing next to Levi NEWPORT, wearing a red T-shirt with a black design on the front, dark jeans and black basketball boots with white toe caps.

"Police are following good lines of enquiry in relation to other persons believed involved in the incident and I would like to take this opportunity to ask these people to consider their position and consider contacting us before we locate them."

A male Maori about 182cm tall and of medium build, NEWPORT has an extensive criminal history and should not be approached.

Anyone with any information on NEWPORT'S location or the identity of 'Devon' is asked to contact the Hamilton Police on 07 858 6200.

Alternatively information can be left anonymously with Crimestoppers on 0800 555111.