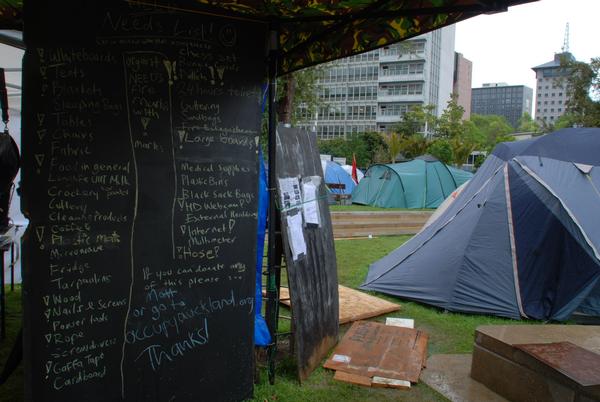 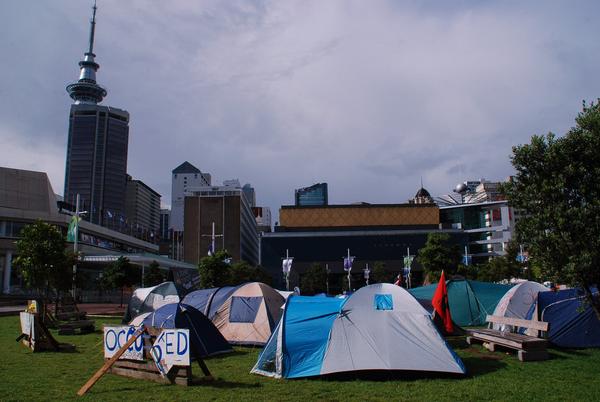 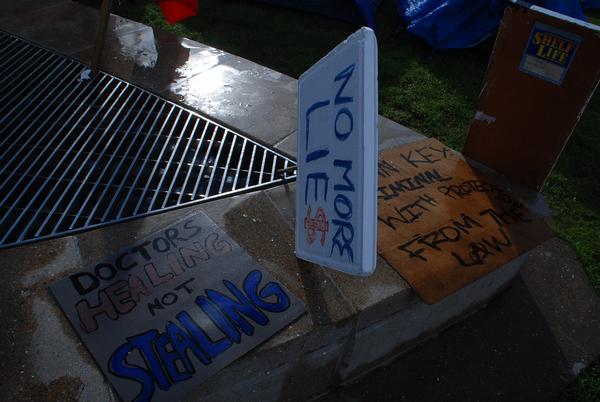 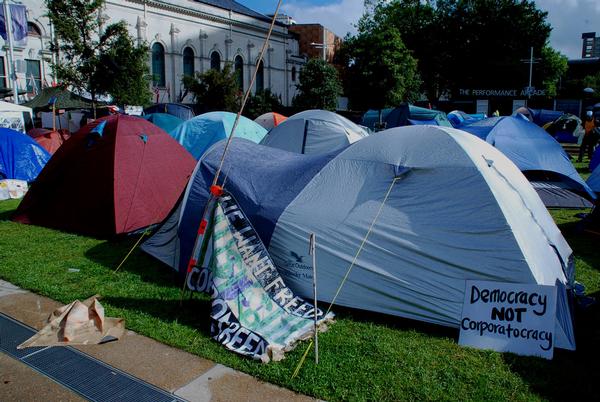 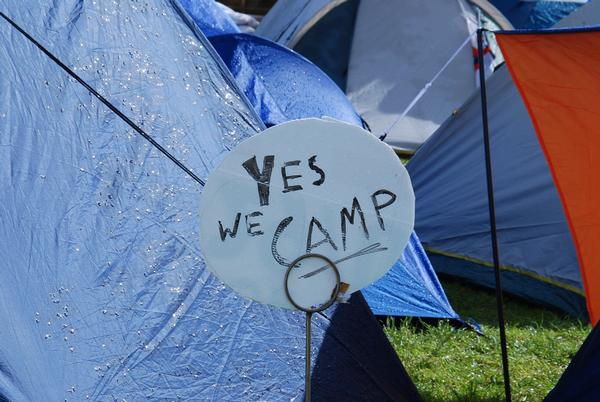 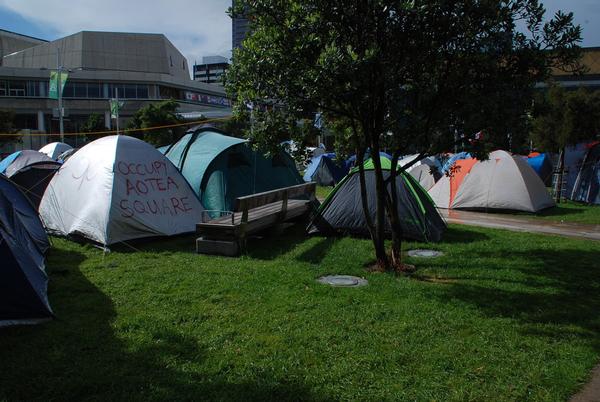 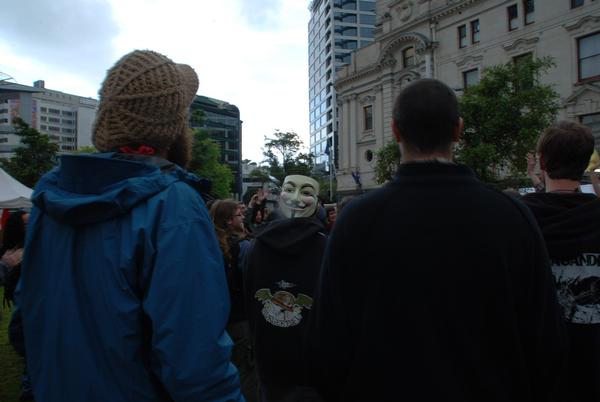 Occupy Auckland - A visit to the camp

Though the clouds are low and unmoving upon approaching Aotea Square on a mid-October afternoon, the campus of Occupation Auckland is active. Subject to the merciless rain, today the camp signs are a bit weatherworn and some occupiers express the need for a good night’s sleep. But the sentiment is stated matter-of-factly and after a quick yawn there are things to be done. The main tent is bustling with life: overheard is an order to take surplus food donations to a local homeless shelter and the news of the campus’ kitchen earning an A grade from Auckland Council.

Walking through the kitchen –where the daily meals are listed on a whiteboard- brings you to the ‘Media Tent’ and then a large board where the ‘Needs List’ is written in chalk. Further demonstrations of organisation are the medics on site, one whom I speak with and another on duty donning an arm band with a Red Cross. Food preparation begins in the kitchen and an announcement that the general assembly will be on in a half hour is passed through the camp.

Among those I question about OWS and its particular meaning for New Zealand, some are hesitant to attach singular political names to the 1% faction and others eager to vocalise their resentment toward governmental individuals.
One perspective offers that the movement itself, ‘a direct democracy’, is recognisable as part of the solution to the problematic system posed by the current government. In this fashion the spirit of Occupy Auckland is at once an enigmatic mix of motivations (at the moment, the mission statement from the website is a borrowed statement by OWS protestors read by Keith Olbermann), but ultimately determined for positive change and refreshingly diplomatic in approach.

Optimism, communication and clarity over anything else are essential to the camp’s daily agenda. It is fitting then, that when the camp’s communal megaphone is discovered in disrepair they adapt with democratic ingenuity and resort to a type of verbal reflecting technique to carry out the general assembly. We are instructed to repeat everything that is said back to the person speaking. The speaker stresses that this method is meant to make sure that everyone is being heard and understood properly and conducts the beginning of the assembly in brief phrases. Shortly thereafter, the crowd is advised to temporarily break into smaller groups and organise their questions and concerns to make the assembly more fluid and time efficient.

The camp’s agency in the occupation seems to elude specifics, operating more as an open and collaborative platform on which ideas are exchanged and discussed via the general assembly. The movement as a whole also seems to resist existing solely to exercise blatant finger-pointing and devotes itself instead to engaging in civil discourse to actively work toward solutions. As it is a collective reaction of political frustration and demand for transparency among other things, it’s clear that one person is not and cannot be a representative for Occupy Auckland. The camp’s face is one of solidarity, non-discriminative of background, inclusive of multiple generations and accommodating to all people experiencing discontent as the 99% within the existing system.