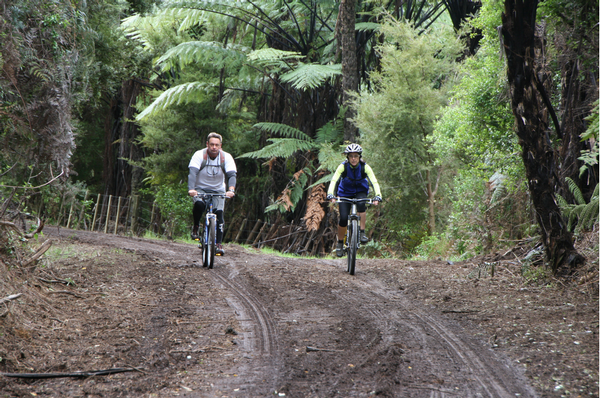 Bees gather pollen from Manuka flowers, fantails flit around you and a tui sings in the branches above.

You feel relaxed and at one with nature.

That was the dream a group of visionary people in Kaikohe had when they started planning the Pou Herenga Tai Twin Coast Cycle Trail three years ago.

Today, they are well on the way to making that dream a reality, thanks to a $40,000 CommunityCare Fund grant obtained from Transpower in March 2010.

The community has used the grant to plant more than 6000 native trees and shrubs along the Okaihau to Kaikohe section of the 85 km trail which the Far North District Council is developing with a $4 million government grant.

The group plans to create a coast-to-coast biodiversity corridor by planting more trees and shrubs as new sections of the trail are developed.

“When we started this project, we saw the trail mainly offering recreational and economic benefits.

“But then we realised we had an opportunity to enrich the cyclist’s experience by developing the trail as a biodiversity corridor that connected bush remnants on farmland along the trail.”

Adrienne is awed by the way the community has embraced the project.

Heritage Kaikohe members have played a pivotal role in developing the biodiversity corridor, raising native seedlings in a greenhouse at the Pioneer Village.

“It’s also about looking after the natural environment for future generations.”

“These will have a better chance of survival if we grow them on in a greenhouse and transplant them at the trail when they are big enough to withstand damage from pests and cyclists.”

Other plants have been donated or sourced from native plant wholesalers.

“Once word got out, farmers brought in native plants from their paddocks. The response has been amazing.”

Waimate North botanist Justin Blaikie has also been a key player, giving his time to undertake an ecological audit of the trail.

“Thanks to Justin, we know which areas of the trial have high biodiversity values that need preserving.”

Mr Blakie spent time educating Community Max workers about plant species along the trail, pointing out which plants were native so they only removed exotic weeds.

“We wanted our workers to look back on their cycle trail job as an educational experience.”

He also helped to organise community planting days on the trail, ensuring that native trees and shrubs were planted in areas most suitable for optimum growth.

“We’re trying to get the community to value the trail and feel a duty of care towards it.”

The council is grateful to Transpower for helping to make the biodiversity corridor project possible.

“We didn’t just spend Transpower’s money. We invested it in an asset that has the potential to heal nature, create jobs and keep people fit and happy.