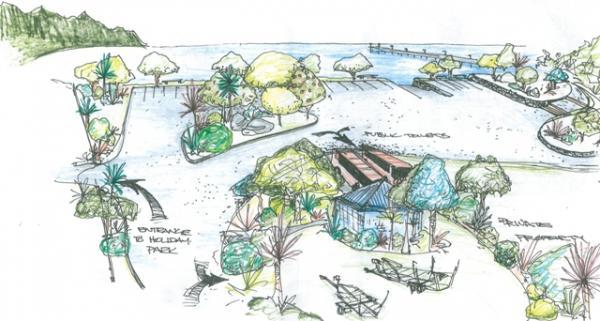 The entrance to the iconic Tolaga Bay Wharf is having a face lift in time for the Transit of Venus celebrations in June 2012. The grassed area in front of the wharf entrance is currently closed to all vehicles while Gisborne District Council contractors install a car park. This is likely to take about 6 weeks and be finished in time for the Christmas holidays. In the meantime visitors to the wharf can park on the grassed area to the right of the wharf.

Stage two of the facelift includes landscaping with shade trees and picnic tables. Storyboards will tell the history of the area and a formal entrance that includes a Māori pou will be installed.

The much photographed taonga is the longest concrete wharf in the southern hemisphere and in 2009 was upgraded to a category 1 historic place by the New Zealand Historic Places Trust.

Since 1999 fundraising by the Save the Tolaga Bay Wharf trust and engineering support from the Council has seen much of the wharf restored. Now it is time to enhance the entrance to this popular recreational facility. Previously visitors to wharf have simply parked on the grass verge alongside the beach.

The new car park will tidy up the area and includes parking for 22 cars and buses. Mobility parks have been included and for the first time there will be easy access from the car park to the wharf for those that use wheelchairs.

Tolaga Bay – Uawa will host international celebrations for the Transit of Venus in June 2012. A number of events are planned for the area including the transit of Venus Forum organised by the Royal Society of New Zealand and convened by 2011 New Zealander of the Year, Professor Sir Paul Callaghan.