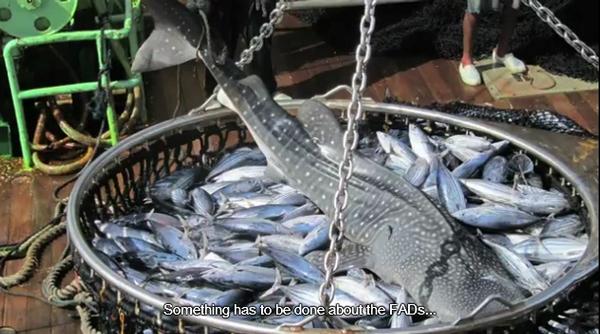 Greenpeace today released shocking footage and images of whales and a marlin and ray dying at the hands of industrial tuna fishers in the Pacific Ocean.

The footage was shot by a New Zealand helicopter pilot turned whistleblower, who undertook aerial reconnaissance for a small fleet of tuna boats in the Pacific in 2009. To protect the pilot from reprisals Greenpeace has disguised his identity.

Filming secretly the pilot documented marine life being hauled on deck dead or dying, after being caught in purse seine nets set around fish aggregation devices (FADs). FADs are used by the fishing industry to attract tuna, however they also attract a whole range of other marine life – like the whales shown in the footage - which is then scooped up by fishing nets. The unwanted species are collectively described by the industry as bycatch.

The video can be viewed here:
http://www.greenpeace.org.nz/tunavideo/

According to information circulated by Sealord, ‘bycatch in FAD-based tuna fisheries is made up of other fish, sharks and rays, averaging about 5% of the total catch”. In addition, this method of fishing also results in substantial catches of undersized tuna. “This can represent from 15-20% of a purse seine FAD set catch.’

Due to the huge volumes of tuna caught in the Pacific these bycatch rates equate to shameful amounts of marine species being killed.

Thomas continues, “About 200,000 tonnes of this bycatch is caught annually by the global tuna industry’s destructive practices. That’s the equivalent of more than one billion cans of bycatch needlessly destroyed every year.

Greenpeace launched a campaign in April urging New Zealand’s five main tuna brands to stop sourcing tuna caught using the combination of FADs and purse seine nets. Soon after Foodstuffs announced most of its Pams brand tuna would be sourced from pole and line or FAD-free fisheries by the end of the 2011. Foodstuffs has confirmed FAD free tuna is now available in its South Island and Wellington supermarkets and will soon be on sale in the Auckland region. Last month Greenseas, owned by Heinz in Australia, committed to phase out FAD caught tuna by 2015.

“As New Zealand’s largest supplier of canned tuna Sealord should be ashamed to be involved with unsustainable tuna fishing. While Sealord defends indiscriminate FAD fishing their competitor Pams has become a market leader in tuna sustainability in New Zealand by switching to FAD-free and pole and line caught tuna,” says Thomas.

“Banning FADs in purse seine fisheries is an important step towards protecting the Pacific from destructive tuna fishing which is threatening tuna stocks and the region's food security and economic prosperity.”