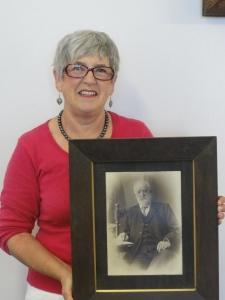 Visitor to the Council

Today we had Jenny Jordan pop into the Head Office in Marton. Jenny is the great granddaughter of Frederick Beaven the first Mayor of the Marton Borough Council.

Here’s a little information from archives:

‘Mr Frederick Beaven came to the Dominion as a lad and arrived in Marton in the early “fifties.”

He was in charge of a store in Wellington Road and built up a strong business, leaving here (Marton) for Palmerston North in 1883.

As Marton’s first Mayor he set a fine standard for that high office and took an active interest in the young Borough’s affairs.