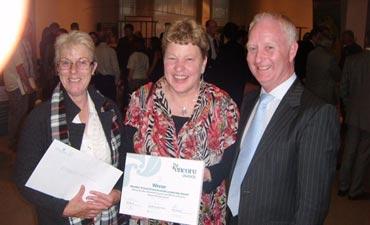 Two Hutt Valley School’s have been recognised for their commitment to sustainability at the recent Encore Awards.

Here’s what the judges had to say:

“Murray, Elizabeth and Wendy have developed a whole school approach to education about the environment and sustainability that has been instrumental in their school becoming only the second in the Hutt Valley to achieve Enviroschools' Green Gold.

Students are actively engaged in environmental actions at the school, developing a waste system which has reduced waste going to landfill and resulted in savings; creating areas within the school grounds to grow food, including an area for fruit trees, and establishing a weta habitat to improve the school’s biological diversity.

Environmental sustainability messages are also being taken home by students, who are helping their families reduce waste, and use energy wisely.”

“Five years of dedication from Greenie Group students has resulted in a vibrant garden area and in school programmes such as food technology.

There is widespread student involvement and enthusiasm, commitment outside school time, and pride in what’s been achieved – a garden growing produce used in conjunction with classroom programmes, and the installation of a rainwater collection system to water the gardens.

The Greenie Group has also been involved in a paper recycling system and flood protection plantings along the Hutt River near the school.

It is now well-established and an integral part of the school, with students gaining immense satisfaction from their projects, as well as developing impressive skills as leaders, project managers, marketers and advocates.”

The group’s lead teacher Duncan Lints was also recognised with a highly commended in the leadership category.