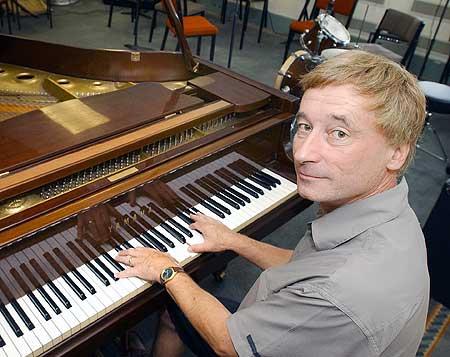 Nominated last week as one of three finalists in the Recording Industry Association of New Zealand’s Best Jazz Album 2012, aka Jazz Tui award, Mr Broadhurst, who teaches at the Albany campus, reckons the French-flavoured album is his best work yet.

He is vying for the title with peers from the New Zealand School of Music, run jointly by Massey and Victoria Universities in Wellington and Albany. The other finalists include Wellington-based Dr Rodger Fox’s Wellington Jazz Orchestra’s Journey Home, and saxophonist Tim Hopkins’ Seven, recorded for his master’s degree recital.

Delayed Reaction is Mr Broadhurst’s eighth album to date and his first in seven years. In it he pays tribute to and channels his muse, the late legendary French pianist Michel Petrucciani – the subject of his jazz master’s thesis. He completed it in 2007 at the Albany campus-based Jazz Studies centre, where he is a programme coordinator.

Five of the ten tracks are his own arrangements of Petrucciani pieces, and the other five are originals inspired by the diminutive pianist who died in 1999 aged just 36, outliving medical expectations for the rare osteogenesis imperfecta (glass bone) disease which meant he grew to only three feet tall.

In the innovative spirit of jazz music, Mr Broadhurst alters, reinvents and transforms the originals while evoking Petrucciani’s definitive lyricism, romanticism and rhythmic sense that he says Petrucciani fans will recognise.

His most radical rearrangement is Petrucciani’s Looking Up, recast as New Orleans boogaloo, while La Champagne has lyrics written and sung by his wife and jazz diva Julie Mason, who also teaches at the Albany campus.

Big band legend Rodger Fox’s CD is the first from his new group, and features compositions by New Zealand jazz great Alan Broadbent. Tim Hopkins wrote, arranged and produced all seven songs on his seventh album, Seven. Finalists are selected from jazz albums released in the 12 months to September 2011, with the winner announced at next year’s 50th National Jazz Festival in Tauranga at Easter. Recording Industry Association managing director Chris Caddick says judges will have a tough decision to pick a winner from three world-class albums.