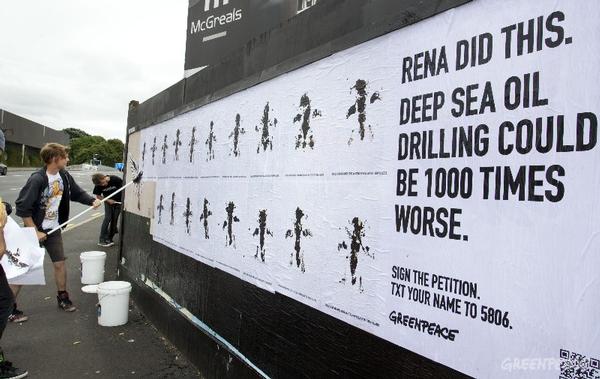 This morning 150 original art prints made from a little blue penguin killed by the Rena disaster appeared along Auckland’s Khyber Pass Road. The prints are accompanied by the message ‘Rena did this. Deep sea oil drilling could be a thousand times worse.’

Greenpeace Campaigner Steve Abel said, "This memorial to the 20,000 birds killed by the Rena disaster is also a stark reminder of the dangers of opening up New Zealand waters to deep sea oil drilling."

The little blue penguin was found dead and covered in oil on Matakana Island by Greenpeace volunteers when they were helping the local iwi, Nga Hapu o te Moutere o Matakana, clean oil off their beaches following the Rena spill. A diving petrel was also found.

An art collective made up of creatives from Publicis Mojo and Greenpeace volunteers came up with the concept of making ‘oil prints’ with the birds, and donated their time to create hundreds of prints.

The original ‘oil on canvas’ prints will feature at a ‘pop up’ gallery opening at 5pm this evening (Monday 12th) at 2 Queen Street, Central Auckland. The gallery will also screen a short film about the making of the bird prints, featuring a soundtrack donated by the band Radiohead. The exhibition will be open daily from 9.30am-5.30pm until Friday December 16th.

The impacts of the Rena accident shocked New Zealanders, but in global terms the 350 tonnes spill was relatively small.

In 2010 the Deepwater Horizon accident leaked 627,000 tonnes of oil into the Gulf of Mexico, while engineers spent months struggling to fix a problem 1.5 kilometres below the sea’s surface.

In 2009 the Montara oil rig blowout happened in Western Australia at a depth of only 80 metres. It took two and a half months to get under control. The Australian Department of Resources, Energy and Tourism estimates that the Montara oil leak could have been as high as 2,000 barrels of oil per day; this equates to one Rena-type spill every day for 74 days in a row.

Undersea pictures and videos taken by experts from the Surabaya Institute of Technology (ITS) in October 2011 revealed that around 64,000 hectares (158,000 acres) of coral reefs in the Sawu Sea had been destroyed by both the Montara spill and chemical substances — including the chemical Corexit 9500 — that were used to submerge the oil in the clean-up efforts.

Global oil companies now prospecting in New Zealand waters have been involved in numerous devastating oil spills worldwide, including the Deepwater Horizon disaster and the recent spill off the coast of Brazil.

The Government has invited oil companies to drill in New Zealand waters at depths of up to 3km.