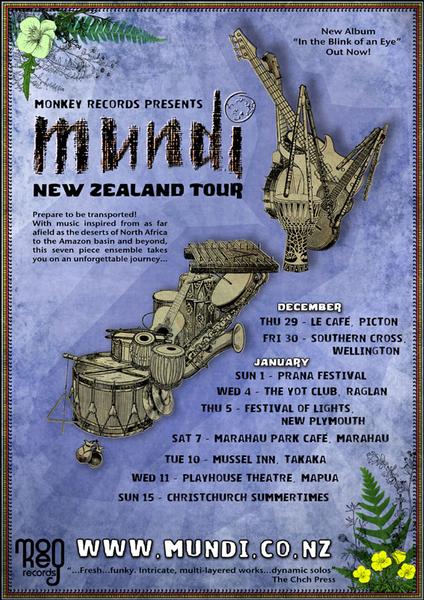 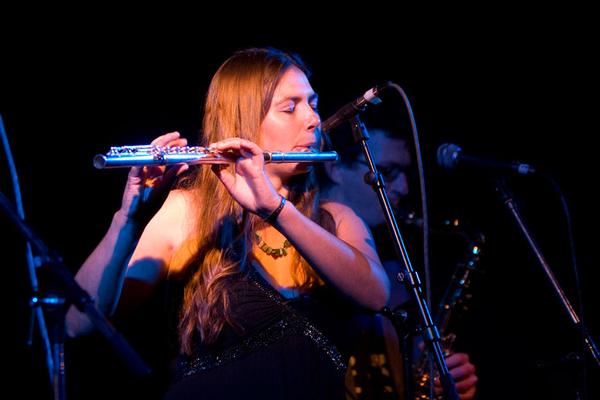 Prepare to be transported! With inspiration from as far afield as the deserts of North Africa to the Amazon basin and beyond, Mundi takes you on an unforgettable journey.

Currently celebrating the release of their second album “In the Blink of an Eye”, Mundi has expanded to feature an exciting array of instruments including flute, sax, banjo, marimba, voice, bass and world percussion. This original world-jazz band is not to be missed!

A well travelled bunch, they have covered almost every continent on the globe between them, taking the pulse and flavour of some very exotic regions.

Earlier this year art became life for Mundi, as composer and flautist Tamara Smith explains when describing their new album :
“I was intrigued by the small vignettes we see on a daily basis. Little fragments of another’s life; a small segment of a story about to unfold, captured like a still frame in the blink of an eye. In the time frame of the world, civilisations have risen and crumbled, and this too has been in just a “Blink of an Eye”. This became a little more real to us in the early hours of a Christchurch morning when the earth rumbled for less than a minute, but in that time, changed the face of our city and the lives of many people... “

Despite setbacks of an earth shaking variety, a birth and other life changing events, the new Mundi album is finally here! While utterly original, it is a synthesis of many global colours and influences. It takes the listener on a musical journey, traversing landscapes rich with texture and surprise; allowing them to experience through their own imagination other vignettes of the world.

* denotes free entry, all other gigs doorsales only except prana.co.nz for Prana tickets