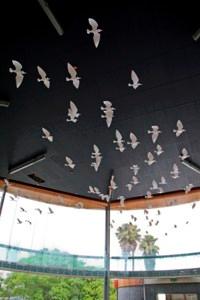 A skywalk offers visitors a bird's eye view of the atrium where 7 carved pou will look down on a giant stingray etched into a polished concrete floor. CREDIT: Far North District Council 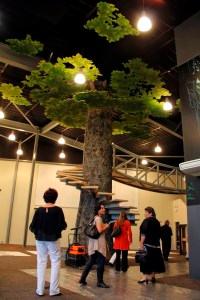 Te Ahu Will Open For Business In February

It’s been more than seven years in the making, but Kaitaia’s Te Ahu Centre will finally open its doors for business in eight weeks.

Te Ahu Charitable Trust is in the final stages of completing the new 2,300 square-metre building that will house a library, museum and archive, cafe, i-SITE and Far North District Council service centre.

The refurbished Little Theatre, Te Ahu Cinema and Community Hall, which boasts a new kitchen and courtyard area, opened to the public earlier this year.

The trust has advised the council that it can start moving into the building from noon on Friday 10 February for a soft opening of The Centre on Monday 13 February.

Trust general manager Mark Osborne says builders and trades people have continued to make good progress since the public was given a sneak preview of The Centre’s interior on November 9.

A skywalk around an eight-metre-high atrium, where more than 100 Perspex kuaka (bar-tailed godwits) now soar, is finished.

The pou will encircle the atrium and look down on a giant stingray etched in a polished concrete floor symbolising the seafloor and Te Hiku o te Ika - the tail of the fish.

Three more pou representing Te Aupouri, Ngati Kahu and people of Dalmatian descent will stand alongside the pou when they are completed.

Other areas of the centre are also nearing the fit-out stage.

A floor-to-ceiling fibre-glass kauri tree and swing bridge have been installed in the library where a wall mural evokes native bush.

A creative director from Wellington firm Story Inc is assisting with the installation of 48 display cases in the museum area where black walls, dimmed lighting and spotlights will allow the Far North Regional Museum to display artefacts to dramatic effect.

The nearly-finished centre made a big impression on Deputy Mayor Ann Court when she visited it with councillors and council staff last week.

“My first impressions were that the facility is just amazing. It will become the heart of Kaitaia.”

She thanked those people who had the vision to create something that was not only functional but a work of art as well.

Hokianga-Kaikohe Ward councillor Tracy Dalton was equally impressed and praised everyone involved in the project.

“Te Ahu is a fantastic community complex. “The concept has been inclusive and the result is very attractive.