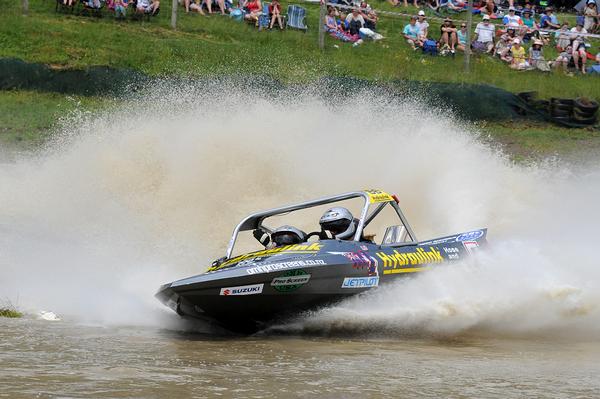 Whangarei's Denis and Steve Crene were on fire today, taking the win in the Jetpro Lites category at the series second round held near Wanganui. CREDIT: Ian Thornton

Wanganui’s Leighton and Kellie Minnell topped the time sheets for today’s second round of the 2012 Jetpro Jetsprint championship held just north of the river city, fastest of the 29 teams’ competing for the sprint boating title.

Heading off a multi-pronged attack in the Suzuki Superboat category, Minnell kept a low profile during the day’s elimination runs, constantly bettered by runner-up and fellow locals Rob Coley and navigator Reece Townsend.

Similarly, Wanganui’s Steve Bron and Jared Fletcher had the measure of Minnell. However when they self eliminated along with Duncan Wilson and Jamiee-Lee Lupton in the top-eight, Lower Hutt’s Ray Ferguson and Mark Shirtliff were left to contend for the podium run-off.

“Pretty happy,” a relieved Minnell said. “There was a bit of pressure coming in to this one. I really love this track and while the others are good, to me, the home track and a good crowd here today really made it that much harder. Plus there was some good competition. Everyone has raised the bar this year and even we’re searching and trying to find a little bit more every time we get in to the seat, but so is everyone else.”

Leading the Whitepointer Boats Group A category, Hamilton’s Sam Newdick and navigator Dane Murphy took round honours, 3/10 second ahead of Taupo’s Reg and Julie Smith. Finishing third in the final run, Thames based Bevan and Kathy Muir were a further 2/10 second behind with the top-five boats all setting times less than a second apart.

“We thought we had the right combination going in to the top-five and thought it was just a matter of tidying a few bits up. And while we did in some corners in others we let it slip a bit. Overall it was about the same but we managed to pull it off,” said Newdick.

“Overall it’s thinking about the championship. It’s a matter of consistency and to have a podium last round and a win here is just excellent.”

Although it was consistency from Smith that keeps him top of the points’ table. The defending champion heads Newdick by one point.

Whangarei’s Denis and Steve Crene have opened up a three point gap in their chase for the Jetpro Lites title. Winning the round by 3/10 of a second over second placed Brett Thompson and navigator Megan Brodie, the marine electrician has leapt ahead of first round leader Ray Thompson, who finished fourth. Third for the day was series rookie Paul Gaston from Adelaide, who ties for second overall on points with Thompson.

“That’s great,” said Crene after being notified of his winning time. “We were slowly trying to better those times and just need to tidy up those hairy corners.

“It’s a good start to the championship, that’s for sure. Just got to keep the pace up now!”

Held the day after Wanganui’s Cemetery Circuit motorbike racing, the spectator migration to the Shelterview aqua track 10 minutes outside the city again lined the amphitheatre style embankment. While the weather stuck to the summer theme, heat from the on-track action stayed temperate. Waitotara’s Duncan Wilson and navigator Jamiee-Lee Lupton gave the biggest crowd thrill when an overzealous Wilson couldn’t recover from clipping the embankment, coming to rest atop the track embankment alongside the perimeter safety fence.

The next and third round of the series heads to the east coast of the North Island only series. Being held on 22 January 2012 at the Tauherinikau race course, it is the precursor event to the two-round World Series starting three weeks later. The aqua track is located inside the Tauherinikau venue, 4.5 kilometres north of Featherston on SH2.

The Jetpro Jetsprint championship will have delayed television coverage repeated on the Sky TV network during 2012.