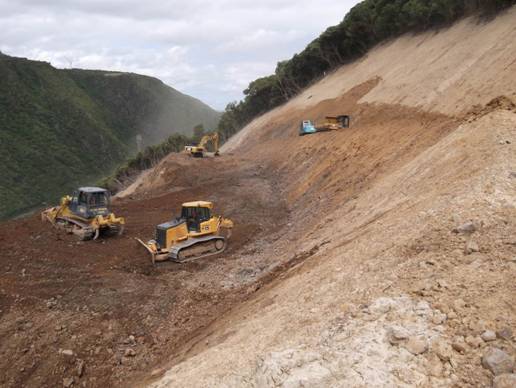 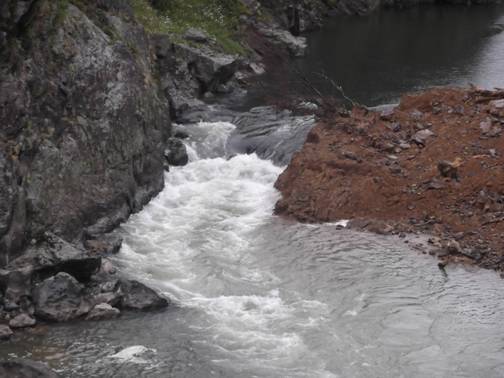 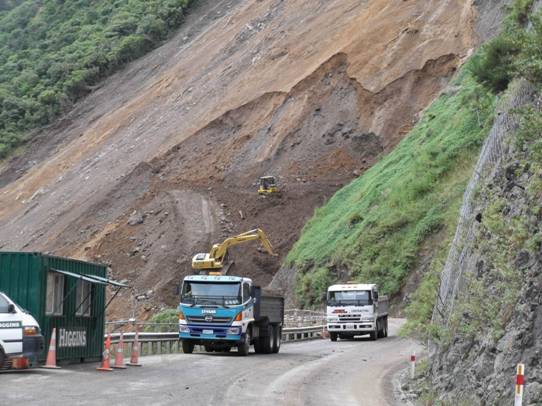 First off, please let me introduce myself. I’m Principal Asset Manager John Jones, and I’m looking after things while David McGonigal is off on a well-earned break. So over the next couple of weeks you’ll be receiving these updates from me.

Our crews also had a few well-earned days off on the statutory holidays (and a few more unexpected days off due to weather), but work to stabilise the upper slope at the Manawatu Gorge slip and clear the road below has continued throughout the holiday period.

The slip
The benching crew swung back into action on January 4, and they have made excellent progress on the second bench. We are working at full capacity and expect to have it completed over the next week.

The road clearing crew has also been going full tilt at the bottom of the slip. Crews are removing 1000-1500 cubic meters of rocks, soil and debris daily.

Once Bench #2 is done, we will start to form the third bench. This is the “point of no return”, meaning that the machinery will have to stay on the slip until all the benches are formed and they can safely track down to the road. Crews will be able to walk in and out of the worksite—via hand-cut stairs along the side of the slip—but the machines will not be able to come up to the top again. We’ll be refueling them using an extended hose.

The river
Rain over the holiday period partially cleared the delta that has formed across the river, and more was washed away as the river peaked this morning.

We continue to work closely with Horizons Regional Council, MWH and Higgins to minimise any risks to the river associated with the slip, and the road crew is trucking out as much material as possible to keep it from going into the river. The stretch of river 200 meters either side of the slip will remain closed until the land above is stable, to protect all river users from falling debris that may be dislodged from the earthworks above.

Back to the future?
Some of you may have seen a recent story in the media about a new route over the Ruahine Range that was proposed in 1971. Taking the same road east out of Ashhurst, the route would have crossed the Manawatu River at the mouth of the gorge, before climbing the Ruahine Range and winding its way toward Cooks Rd at the top. In the end however, the idea was shelved, as this route would probably have been too steep for heavy traffic, the gorge was many years from reaching its capacity, and further improvements to the gorge were already on the cards.

In the light of this extended closure, it might be tempting to think “if only”. But it’s important to remember that most of the time, the Gorge withstands Mother Nature exceptionally well. While closures are terribly disruptive when they happen, before this one, six of the last ten years have been closure-free. The road was only closed for a total of four full days since 2004. Lengthy closures happen about once every eight years, with the last ones in 2004 (70 days) and 1995/96 (around two months).

But none of that makes this closure any less troublesome. We want this road open again as much as you do, and we are doing everything we can to make that happen.

Alternate routes
We continue to focus on keeping the both Saddle Road and the Pahiatua Track in the best condition possible. The second half of Woodlands Road has been widened, and resealing is underway. We will keep up a heightened maintenance programme on both roads until State Highway 3 can be reopened.

And that’s it from us today. We will resume our regular updates this week, with the next one due Friday 13 January. Please feel free to forward them to anyone you feel might be interested. Please also remember to check our dedicated webpage (www.nzta.govt.nz/manawatu-gorge), where we post all the latest information on what’s happening at the Gorge.

I hope you all had a good holiday period, and on behalf of NZTA I thank you again for your patience and understanding throughout this time.