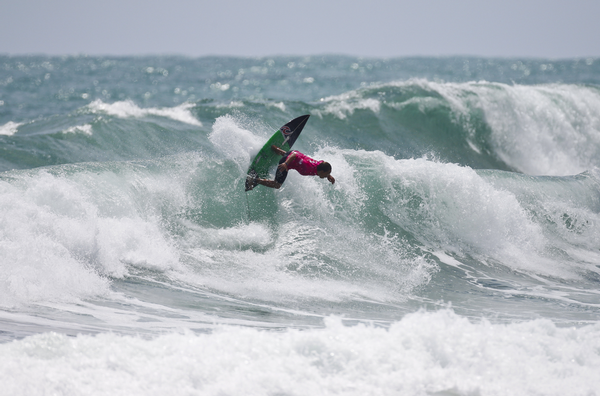 A combination of young and old managed to contest day two of the 2012 Hyundai National Surfing Championships held at Piha today (Monday 16th January) with some of the youngest competitors showing everyone how it is done.

The surf started out poorly but improved throughout the day as the new 2.0m swell filled in and the wind swung to a more favourable south west direction.

The future generation of New Zealand surfers in the Under 16 Boys Division started and finished the day highlighting the improving conditions with high performance.

Young local stand-out Elliot Paerata - Reid (Piha) blazed his quarterfinal posting the highest heat score of the event to date - 15.33 out of 20 points.

"I am stoked, I didn't actually realise" Paerata - Reid said when informed of his event-high performance.

Smashing solid backhand turns on the Piha Bar, Paerata - Reid then repositioned himself over toward the centre of the beach and appeared to have control over the break that only a local could.

"I have a huge advantage being at home and today my Dad scoped out the line up while I was warming up and stretching. I mean, I know where to sit but he points places out as well and that helps to confirm everything for me" said Paerata - Reid.

Paerata - Reid was joined by the likes of Dune Kennings (WGM), Harrison Whiteside (Chch), Korbin Hutchings (Gis) and Mackenzie Bowden (WGM) who all looked comfortable in the conditions as they size increased in the afternoon.

Other standouts included Matt McGreggor, Mahorahora McLeod (Tara) and Isaac Kettle (Tara) who also got good rides throughout the day and made it through to the semifinals. Some of the groms wanted to surf a third round in the one day with the surf continuing to look good in the afternoon.

"Tomorrow looks real good but I would have been happy to surf the semis today" said Paerata - Reid who seemed happy either way.

Current Hyundai Tour ratings leader Thomas Kibblewhite (Auck) left it until the last wave in his semifinal of the Longboard Division to make his move and advance through to the final in a bid to defend his title.

"It was a hard semifinal until the end, I was scratching for waves but I snuck a late wave and it ended up being a sick one" said Kibblewhite. His final wave saw him boost over an oncoming section getting his 9ft board vertical in the process. "I didn't expect to pop up over that big section of whitewash but it just happened like that and turned out to be a high scoring manoeuvre" added Kibblewhite who is gunning for back to back titles.

Kibblewhite found himself trailing Gisborne surfer Michael Fitzharris who ultimately finished the heat in second place to make his first final since the 2009 National Champs.

"Fitzy and I have competed against each other for years and he has taught me a lot in the past and he has been ripping the last two days" commented Kibblewhite on the performance on the elder statesman.

In the first semifinal it was longboard vs shortboard surfers with young Ben Poulter (Rag) the shortboarder taking on the challenge with the change of equipment and overcoming the odds to push Daniel Procter (Gis) into second place, the two surfers both progressing through to the final.

The Stand Up Paddleboard Semifinals were dominated by the two stand out performers of the discipline - Daniel Kereopa (Rag) and Shayne Baxter (Chch). Both surfers found themselves contesting the same heat. Kereopa came out on top on this occasion but the Christchurch surfer will only use that to fuel the fire when the finals come around later in the week.

"There is a bit of southern pride in every one of my performances. I get chicken skin whenever I head out there and that is because I want to represent Christchurch proudly" said Baxter. "I definitely want to represent Christchurch and put a smile on a few faces down there because we have been through some tough times" said Baxter who expects the conditions to be more favourable for the stand up paddleboarders later in the week.

In the second semifinal it was the Whangamata pairing of Karl Aarsen and Lynden Kennings who moved through to the final. Kereopa, Baxter and Kennings hold the only three national titles contested in the division so bragging rights will go on the line when the final is contested.

Earlier in the day the Women's Longboard Division was contested with Alexis Poulter (Rag) and Anna Jolly (Piha) winning their heats to move through to the final.

Conditions for day three are expected to improve further with more favourable and lighter winds with the swell cleaning up. The premier Open Men's Division hit the water on day three with Piha already full with New Zealand's best who are eager to get their campaigns underway.

The all encompassing seven day event runs from the 15th - 21st of January. Please see below for a guide to when remaining divisions are expected to be contested.

The Hyundai National Championships were first held in 1963 when they took place at Mount Maunganui. In its infancy, the event comprised Open Men's and Women's as well as Under 18 Men's divisions only. Since then it has grown to comprise a colossal 25 divisions across all disciplines and the 2012 edition will crown New Zealand's 500th national champion.

Twenty five national titles will go up for grabs at the Hyundai National Championships. As well as the premier Open Men's and Open Women's Divisions, there will be a further 23 divisions comprising of age groups from Under 14 through to Over 50s and also longboard, Stand Up Paddleboard, Bodyboard and Kneeboard disciplines.

Imagery
Web clips and newsfeeds will be distributed free of charge from each event. Please contact Ben Kennings for further details.

High resolution action images of the surfing at all events will be available to media free of charge upon request.

Nationals Blog
Be sure to get a different perspective on the event via the SNZ Nationals Blog. This will be updated throughout the seven days with news views and interviews to keep you entertained.

Event Hotline
The Surfing New Zealand event hotline is 0211134506. This will be updated daily at approximately 7am with venue, divisions contested and conditions.

Partners
Generous support from Hyundai New Zealand and Lion Rock Boardriders has made this event possible.

Surfing New Zealand Newsletter
If you want to keep updated with surfing information delivered right to your inbox then sign up to the SNZ Newsletter.