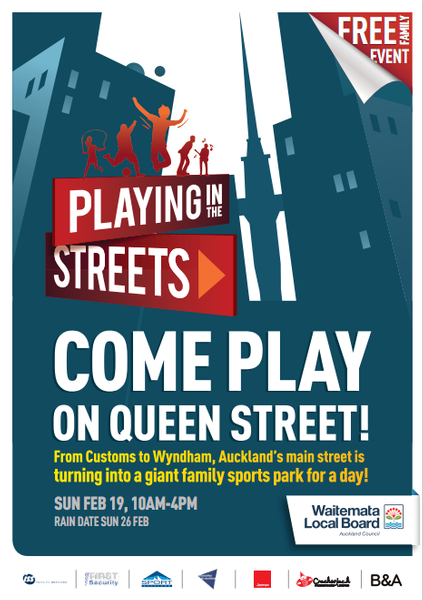 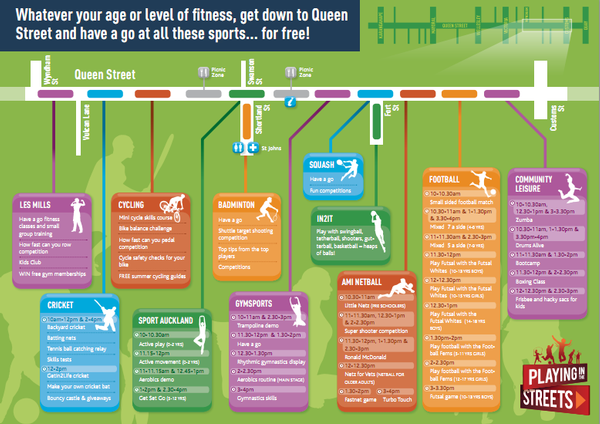 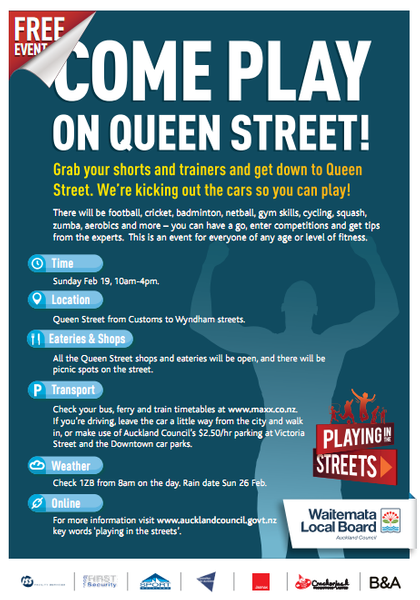 For the first time ever, part of Queen Street is turning into a giant car-free sports park.

The event is to be held on Queen Street between Customs and Wyndham streets on Sunday 19th February, starting at 10am. Aucklanders are encouraged to bring their families and friends, to put on their shorts and trainers, and come and take part, whatever their age or sporting ability to play on Queen Street.

At this free family event, everyone will have a chance to try their hand at a large range of sports including football, squash, cricket, badminton, netball, gym skills, cycling, zumba, aerobics and more. There will be demonstration games, experts on hand to give tips, free bike maintenance, as well as contests and competitions.

All Queen Street’s favourite shops and eateries will be open, and there will be picnic spots on the street, so families are able to make a day of it.

The free day is an initative of the Committee for Auckland’s Future Auckland Leaders programme which taps into the energy and insight of the city's emerging leaders, cultivating their passion for Auckland and helping channel it into projects that enhance the city. Instrumental in delivering the event has been a collaboration with Sport Auckland, who has been a key partner in delivering the sports showcase to Queen Street, and Crackerjack Promotions who are managing the event.

The event was inspired by international cities such as Bogota, New York and Copenhagen which have successfully opened streets to people rather than cars over the last twenty years. The aim of the event is to create a space for playing sport in the city for children, young people and adults, drawing people into the heart of the city and thus building relationships between young people, the city and its businesses. The intention is to demonstrate the social, cultural, environmental and economic benefits by providing a new destination for Aucklanders in the city on a Sunday. It is hoped that this will be the first of many future events where people can play in Queen Street.

Check 1ZB from 8am on the day in case of adverse weather. The rain date for the event is Sunday 26th February.