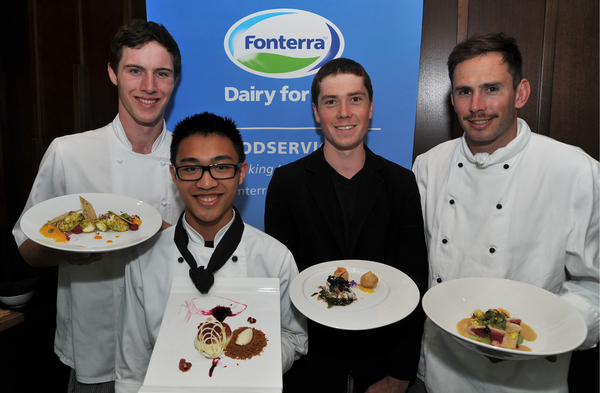 Young Chefs head to Melbourne to do New Zealand Proud

Four Kiwi trainee chefs are gearing up to take on Australia’s best in the Fonterra Foodservices Proud to be a Chef Australasian final in Melbourne later this month [Eds: Monday 27 February – Thursday 1 March].

They were selected from a handful of finalists at the New Zealand Proud to be a Chef ‘cook off’ competition held late last year, at which they had to cook a dish they had created under the watchful eye of judges Michael Meredith (Merediths), Tony Astle (Antoine’s), Geoff Scott (Vinnies) and Brenda Tweddell from Fonterra Foodservices.

The trainees were evaluated not only on their dish, but also on their demonstrated passion to food servicing, their aspirations, goals and committment to a career as a chef.

The prize includes three nights’ accommodation and dining at award winning restaurants in Australia’s culinary capital where the Kiwis will join 26 top Australian trainees to mix with industry leaders and talk about exciting career developments.

The culmination of the three day event will be a gala dinner at PM24 on 29 February, at which the overall competition winner will be announced.

Rebecca Cuthbertson, Senior Brand Manager for Fonterra Foodservices, says Proud to be a Chef is recognised as one of the most prestigious chef mentoring programmes in this part of the world.
“Fonterra Foodservices Proud to be a Chef was set up as a way to publically recognise and reward the vital contribution that chefs make to the industry and provides up-and-coming culinary stars with the necessary skills, resources and mentoring they need to take their career to the next level.

“We wish our four finalists all the best as they head to Australia and after one of just two Kiwi contestants, Elliott Pinn, was awarded second place in last year’s final, we have high hopes for another great result this year.”