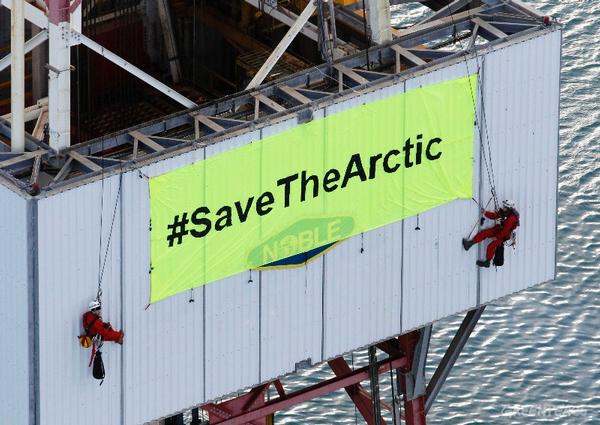 The occupation of Shell Arctic drillship Noble Discover has continued for a third day. Five Greenpeace activists and actor Lucy Lawless remain in place on top of the drillship, after spending a chilly second night on top of its 53 metre drilling tower.

Morale onboard has been boosted by the thousands of support messages that have been flooding in over the course of the day.

Yesterday activists hung a giant #SaveTheArctic hashtag banner on the drill tower and the hashtag has been trending on and off around the world ever since.

The activists, who are equipped with iphones and tablets, which they are keeping charged with a foldable solar panel, have been inundated with twitter messages, facebook comments and emails from supporters around the world. All of this is being aggregated in a ‘live feed’ on the Greenpeace home page: http://www.greenpeace.org.nz

“It’s been so inspiring to get all of these online messages and to know that standing alongside the six of us on this ship, there are hundreds of thousands of other people around the world who feel passionate about the Arctic and are prepared to take action to put a stop to Shell’s crazy Arctic drilling plans” said activist Viv Hadlow.

In direct response to the drillship occupation over 122,000 people worldwide have emailed Shell over the past 48 hours, asking the company to drop its Arctic oil drilling plans.