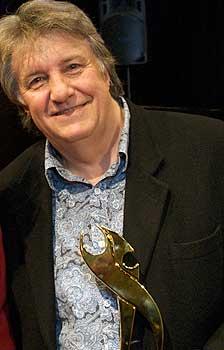 A fifth Tui for Fox

Journey Home, the CD recorded by Rodger Fox's Wellington Jazz Orchestra, has won the Tui for Best Jazz Album of the Year for 2012 in the Vodafone New Zealand Music Awards.

The 2012 Tui was always going to be a cause for celebration at the Te Koki, New Zealand School of Music. Tim Hopkins recorded his album as part of his postgraduate study at NZSM and both Mr Broadhurst and Dr Fox are NZSM lecturers – at the Albany and Mt Cook campuses respectively.

The album Journey Home is the first CD from the Kiwi jazz legend's new band and was released in June 2011 by Jayrem Records. The album compositions are by acclaimed jazz pianist, arranger and composer Alan Broadbent and were produced by Rodger Fox and the band. The judging panel felt such a wealth of experience resulted in a thoroughly mature and accomplished first release.

New Zealand Music Awards spokesperson and RIANZ managing director Chris Caddick says, "It's fitting that a real icon of New Zealand music has won the Tui for Best Jazz Album in the 50th year of the National Jazz Festival in Tauranga. Sincere congratulations to Rodger Fox for a much deserved win."

The Wellington Jazz Orchestra has performed and honed its craft with some of the biggest names in jazz including Michael Brecker, Bill Cunliffe, Joe Williams, Louie Bellson, Bob Sheppard, Bruce Forman, Bill Reichenbach and Jim Pugh. Each side of the National Jazz Festival this Easter they performed with Grammy award-winning USA Jazz vocalists Kurt Elling and Patti Austin and saxophonist Eric Marienthal in concerts held in Wellington, Auckland and Tauranga. Proceeds from these concerts are going towards their next project: to travel to the USA in July to record an album at the legendary Capitol Studios in Los Angeles.