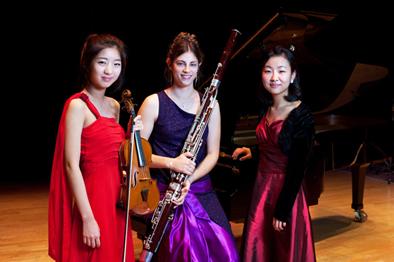 Three virtuosos from The University of Auckland’s School of Music will vie for supremacy at the annual Graduation Gala Concerto Competition at the Auckland Town Hall next month.

This year the finalists – Stella Kim (violin), Natasha Port (bassoon) and Nayoung (Jane) Koo (piano) – will compete for the grand prize and the opportunity to further an illustrious solo career.

Each finalist will perform a full concerto or symphony accompanied by The University of Auckland Symphony Orchestra conducted by internationally acclaimed musician and School of Music Professor, Uwe Grodd.

This year’s judges are Dr Eve de Castro-Robinson and Stephen De Pledge from The University of Auckland who will be joined by Professor John Drummond from the University of Otago. The prizes have been generously sponsored by MusicWorks and the top performer will receive $5,000 with $3,000 for second place and $1,000 for third.

A special feature of this year’s concert is a performance of Mozart’s Dies Irae for choir and orchestra by The University of Auckland Symphony Orchestra and massed choir.

Nineteen year-old, North Shore-based violinist Stella Kim was born in South Korea and moved to New Zealand a decade ago. She has performed as a soloist with the Aotea Youth Symphony Orchestra, the Westlake Symphony Orchestra and St Matthews Orchestra. Stella was the recipient of the North Shore Harmony Club Scholarship in 2009 and Junior Prize winner at the Tauranga Chamber Music Contest in both 2009 and 2012. Stella is currently completing a Bachelor of Music degree in Classical Performance.

Twenty-one year-old, North Shore-based bassoonist Natasha Port studied for a conjoint Bachelor of Music, Bachelor of Science degree (BMus/BSc). She is currently completing her final semester of her Bachelor of Music degree. Natasha is a previous winner of the Les and Sonia Andrews Woodwind Prize and has been involved in several orchestral and ensemble groups. These include The University of Auckland Symphony Orchestra, Auckland Youth Orchestra, Tempesta Wind Quintet, the 2011 Student Opera Project and the National Youth Orchestra.

Nineteen year-old, Parnell-based Nayoung (Jane) Koo, originally from South Korea, was awarded the Piano Festival Cup for “Most impressive item” in 2008. The following year she was selected to perform in the Lewis Eady Charitable Trust Concert Series. In 2010 Jane received her LTCL diploma in solo piano with Distinction, attaining the highest mark in New Zealand. Jane was also awarded the Yamaha Cup for winning the Senior Pianoforte recital class at the North Shore Performing Arts Competition. Recently, she performed Beethoven’s Third Piano Concerto with the Auckland Symphony Orchestra. Jane is the current recipient of the University’s Constance Herbert Memorial Scholarship.

The concert will begin with Natasha Port on bassoon performing Bassoon Concerto in F major, J.127, Op.75 by Carl Maria von Weber, followed by Stella Kim on violin performing movements 1, 3 and 5 of Edouard Lalo’s Symphonie Espagnole for violin and orchestra in D minor, Op.21. Nayoung (Jane) Koo on piano will then perform movements 1 and 3 of Piano Concerto No. 2 in G minor, Op.22 by Camille Saint-Saëns.

Professor Robert Constable, Head of the School of Music, says the annual Graduation Gala Concerto Competition is an opportunity to showcase the excellent talent at the School and to celebrate the achievements of the University’s autumn graduates.

“Our students put in a huge effort towards their studies and while this applies to all our music students, it is wonderful to see three of them succeed in this way. Music performance takes much dedication and discipline but it is rewards of this type which make it all worthwhile. And it is good to be able to bring the fruits of their labours to the public in this annual graduation event,” says Professor Constable.

The University of Auckland Graduation Gala Concerto Competition will be held on Saturday 5 May at the Auckland Town Hall (Queen Street) at 7.30pm. Admission is free; patrons are strongly advised to arrive early to be assured of admission.