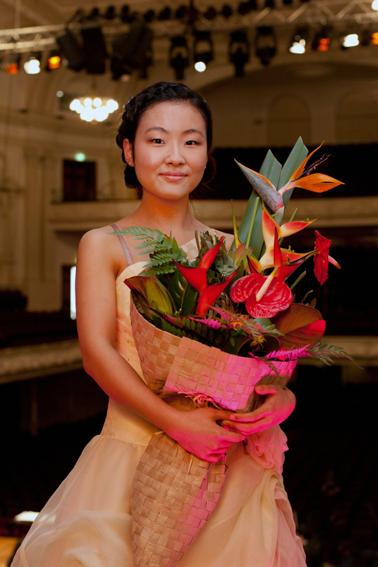 Jane a Bachelor of Music student at the School of Music performed an exhilarating rendition of Camille Saint-Saëns’s Piano Concerto No. 2 in G minor, Op.22 to an enthusiastic audience at The Auckland Town Hall.

Backed by The University of Auckland Symphony Orchestra, Jane played under the guidance of acclaimed conductor Associate Professor Uwe Grodd, to a full-house.

The annual competition, which marks the close of Autumn Graduation Week 2012, was judged by School of Music staff members Dr Eve de Castro-Robinson and Stephen De Pledge from The University of Auckland and also by Professor John Drummond from the University of Otago.

Jane says “It was a huge privilege to be able to compete against such talented musicians and I am overwhelmed to have been awarded first place. I’m hugely grateful for the support of my wonderful piano teacher Qu Yong as well as all the staff who teach piano in the School of Music, Rae de Lisle, Stephen de Pledge, Dean Sky-Lucas and Sarah Watkins”.

Nineteen-year-old Jane started playing piano at the age of five. Now in her second-year of a Bachelor of Music degree specialising in classical performance, she was awarded the Piano Festival Cup for “Most impressive item” in 2008. The following year she was selected to perform in the Lewis Eady Charitable Trust Concert Series. In 2010 Jane received her LTCL diploma in solo piano with distinction, attaining the highest mark in New Zealand. Jane was also awarded the Yamaha Cup for winning the Senior Pianoforte recital class at the North Shore Performing Arts Competition. Recently, she performed Beethoven’s Third Piano Concerto with the Auckland Symphony Orchestra. She has participated in master classes with Joan Havill, Tamas Vesmas and Simon Trpčeski and is the current recipient of the University of Auckland’s Constance Herbert Memorial Scholarship.

“The public response to the Graduation Gala Concerto Competition has always been outstanding and this year’s splendid event was no exception," says Professor Robert Constable, Head of the School of Music. “The concert is a wonderful way to bring the University and the community together in a spirit of celebration because, in so many ways the efforts of our wonderful soloists mirrors and symbolizes the quality of student effort which is celebrated across the University during Graduation Week.”

The University of Auckland’s National Institute of Creative Arts and Industries comprises the School of Architecture and Planning, Elam School of Fine Arts, the Centre for Art Research (CAR), the School of Music and the Dance Studies Programme.