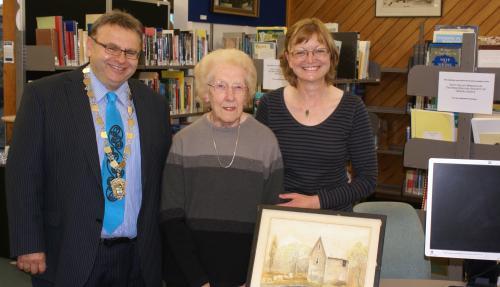 A water colour painting of Percy's Mill picked up in a junk shop will hang in the Petone Library thanks to a gift by local identity Vera Ellen who has just received a QSO for service to the community.

A former matron of Hutt Hospital and honorary nurse to a Governor General, Sir Denis Blundell, Vera donated the painting on behalf of her late brother Tom who had wished that it be hung in the Petone Library.

"The painting was found in a junk shop, I am not sure where, and had been painted by a former neighbour of ours, William Jeavons, who lived at 110 Hutt Road, just down from where the old mill had been located in western Hutt road," said Eva who was supported by her sister-in-law Kate Ellen.

The undated water colour was a depiction of the 100-year-old mill prior to its destruction by fire in 1945.

Mayor Ray Wallace received the painting on behalf of the library and thanked Vera for bringing it home to Petone.