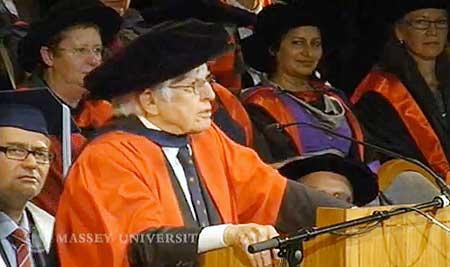 Professor Rom Harre has been awarded an honorary doctorate from Massey University at a graduation ceremony in Palmerston North.

Born in Apiti, in northern Manawatu, Professor Harre’s career has spanned more than half a century and he is one of the world’s leading philosophers.

His first degrees were from the then University of New Zealand, then the University of Oxford, where he became a teacher and lecturer for 35 years, retiring in 1995.

He is currently an Emeritus Fellow of Linacre College, Oxford and a Distinguished Research Professor of Psychology at Georgetown University, Washington D.C.

He is seen as a founder of modern social psychology and his books on social behaviour have been recognised as classics.

Professor Harre received a Doctor of Literature for his significant and on-going association with the University and in particular the College of Humanities and Social Sciences, and his outstanding international contribution in the field of social sciences.

Professor Harre says the honour is special. “Though I have lived abroad for more than 60 years I am a New Zealander and recognition from one’s place of birth is a very special thing,” he says. “I am most grateful for this great honour – it is specially gratifying to be once again ‘at home’.”

Professor Harre visited Massey in 1994, giving lectures, and again in 2007. Since 2004 he has also contributed to a weekly on-line seminar in a graduate course without payment, showing his dedication to teaching and fondness for the University.

“I generally admire the get-up-and-go of the Massey spirit anyway, that has made the university known across the world,” Professor Harre says.

Massey University School of Psychology Professor Andy Lock says Professor Harre’s work has pushed the boundaries of our thinking about people and societies. His work influenced scholars and he has mentored future leaders in the field.

The award from Massey was fitting: “Professor Harre is one of the leading academic sons of the Manawatu, and has a close association with the work of Massey University.”

Professor Harre was awarded the 2009 Distinguished Lifetime Achievement Award by the American Psychological Association. He has published over 50 books, taught around the world and already has honorary degrees from the Universities of Helsinki, Brussels, Lima and Aarhus.

Professor Harre will also deliver a public lecture to mark the publication of his new book with Professor Ali Moghaddam, Psychology for the Third Millennium: Integrating Cultural and Neuroscience Perspectives.

The lecture will be held at Massey’s Japanese Lecture Theatre, Thursday May 17, 10.30am.