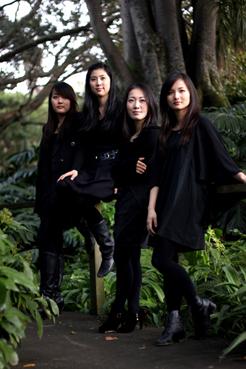 Estrella - a rare form of piano quartet consisting of two pianos with four pianists - will be showcasing the music of New Zealand’s leading composers during their upcoming UK tour.

Cindy Tsao, Gemma Lee, Somi Kim and Judy Lee, who make up Estrella, won the highly contested Sixth Annual Pettman/Royal Overseas League Arts International Scholarship, which will take them to London in July to present a series of concerts.

The four, who are current students and alumni from The University of Auckland’s School of Music, will perform in England, Wales and Scotland as part of the tour. They will also visit prominent music conservatoires, perform in the Corbridge and Norfolk music festivals and participate in the Dartington International Summer School.

The repertoire of the quartet, formed in 2010, includes classical and contemporary pieces with an emphasis on New Zealand works. Informally referred to as “8 hand piano”, or “2 piano 8 hands”, the genre was popular in the late 19th century as it allowed music lovers to hear symphonic works in a venue with just two pianos.

During their upcoming overseas tour their repertoire will include a selection of works from classical to contemporary. They are most excited about performing original New Zealand compositions for their overseas audience, some written especially for them.

“Finding repertoire can be a challenge for 8 hands,” says Judy Lee. “It is difficult as there are only a handful of composers who write for this genre. We are overwhelmed by the opportunity of performing abroad and are excited to showcase a collection of works by New Zealand composers, all of which are original and unique to our country. Composers such as David Hamilton, Leonie Holmes and Robbie Ellis have written works especially for us, which we are very grateful for. We are also hoping to fundraise in order to commission another work - particularly a piece by acclaimed composer Gareth Farr. It's fantastic that overseas audiences will have the opportunity to hear these distinctive local works.”

Estrella will give two concerts before they leave for the UK, with the first in Hamilton on 30 May at 1pm at the Gallagher Academy of Performing Arts. This will be followed by their farewell concert on Wednesday 11 July at 7.30pm at The University of Auckland's School of Music. Both these concerts are free admission but the Quartet will be delighted to receive any donations to their composers’ fund.

To donate to Estrella’s composer's fund please email info@estrella.co.nz
For further information on Estrella and their upcoming tour, visit www.estrella.co.nz