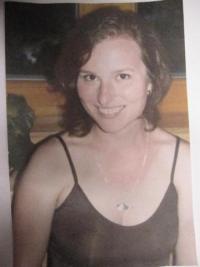 The body of a woman found in a remote forest area near Waimate on Sunday is believed to be a 31-year-old Czech Republic tourist Dagmar Pytlickova, also known as Dasha. (picture available)

"Formal identification has yet to be completed but we are confident it is Dasha." says Detective Inspector Greg Williams.

"Dasha has been in New Zealand since January and recently working at a Cromwell vineyard. We don't know the name of this vineyard as yet.

"We believe Dasha left Cromwell on Saturday and was hitch-hiking to the Timaru area. It is likely that she was picked up by more than one person before she encountered Waimate man Jason Frandi, whose body was positively identified earlier today. We believe the encounter with Frandi could have been somewhere between Omarama and Kurow.

"We need to speak to any person who gave her a lift that day.

"It is also likely that Dasha went to a cafe or takeaway during her journey between Cromwell and Kurow.

She was carrying a 60 litre blue/grey packpack

"Dasha's family in the Czech Republic have been informed and say they are shocked and devastated about what has happened. They are still coming to terms with the news and have requested privacy. They do not want to be contacted by media." said Mr Williams.

Today Police also located the silver BMW car belonging to Jason Frandi. The vehicle was found in trees off the Kaiwarua Road, around 3km from where the bodies were located.  The scene around the car has been cordoned and a detailed forensic examination of the vehicle will be conducted.

"I can also confirm that Jason Frandi was known to Police, and was given a three-and-a-half year prison sentence in 2000 for abduction for sex of a 19-year-old woman.

"We were in contact yesterday with this victim and her family to advise them of developments. Media should be aware that name suppression remains in place for her and she has expressly asked that she is not contacted by media and has no comment to make"

"While we have made positive progress today there is still much work to be done. We need to piece together the movements of Dasha and Jason Frandi on Saturday afternoon and establish how they came into contact.

"This is why we are continuing to appeal for sightings of both of them, as well as Mr Frandi's silver BMW, from Saturday morning.

"Work at the scene indicates to me that is less likely that any other person has been involved in the death of these two individuals. We will be in a better position to comment further about this tomorrow once the results of the post-mortem examinations are known and the search of the vehicle is completed." says Mr Williams.