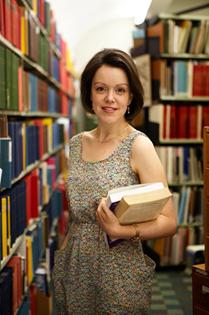 A new book has just been published that surveys the ground–breaking collaborations between choreographers, composers, artists and dancers on the pre-war stage in Paris, France.

Dr Davinia Caddy, from the School of Music at The University of Auckland, has written The Ballets Russes and Beyond: Music and Dance in Belle-Époque Paris. The book, Caddy’s first, investigates the famous Russian ballet company of Sergey Diaghilev and their reception in the Belle-Époque (or Beautiful Era) which started in 1890 and ended at the start of World War I. The Ballets Russes were considered one of the most influential companies of the 20th century and were renowned for their revolutionary choreography and innovative productions.

Published by Cambridge University Press, Caddy’s book presents a revisionist history of the era, exploring not just the choreographic, but also the cultural, political, theatrical and aesthetic concerns of the time. Full of rich historical detail, the book also examines and interprets contemporary French dance practices while offering new perspectives on Diaghilev’s troupe and various influences.

An important and provocative contribution to the burgeoning literature on the Ballets Russes, the book is for readers who share Caddy’s passion for ballet, opera, singing, dancing and the cultural politics of belle-époque Paris.

Dr Davinia Caddy studied music at Cambridge University before taking up a Postdoctoral Research Fellowship at The Queen’s College, Oxford University. A keen flautist, she was awarded a Licentiate in Performance from the Guildhall School of Music and Drama, aged 16. She went on to play Principal Flute in the National Youth Orchestra of Great Britain, working with acclaimed conductors Sir John Eliot Gardiner and the late Mstislav Rostropovich.