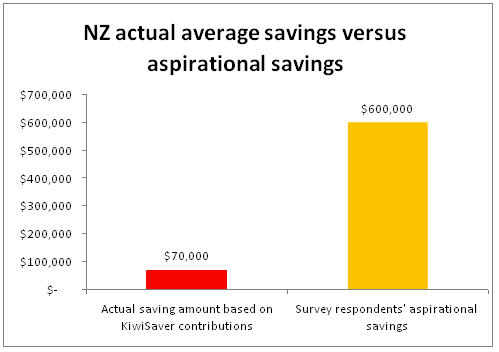 The ASB KiwiSaver Survey is based on 723 online responses gathered from January to March 2012 with adults aged 18 years and older throughout New Zealand. CREDIT: ASB

KiwiSavers run the risk of falling short of their retirement savings goals unless they increase the amount they save, according to an ASB survey.

ASB’s Executive General Manager Wealth and Insurance, Blair Turnbull: “The ASB KiwiSaver Survey of New Zealanders nationwide suggests that many Kiwis know how much money in total they need to have saved to have the annual income they aspire to once they finish working. However the reality of what KiwiSavers are putting aside for their retirement means many will fall short of the nest-egg they need.

“When the time comes many KiwiSavers may well have to look at other options to support themselves, such as selling their family home, or even working for longer, if their only source of retirement income is KiwiSaver and Government superannuation,” Mr Turnbull says.

According to the survey, of those respondents that had retirement savings goals, around half aim to retire on $40,000 per annum, with a target of around $600,000 accumulated by the end of their working life.  Around two thirds of all respondents didn’t know how long they would be in retirement, but of those people that had thought about it, on average they felt it would be for around 25 years.

“Looking at the savings rates of almost 350,000 KiwiSavers in the ASB KiwiSaver Scheme we can clearly see that most people are going to fall short of these goals. Regardless of the kind of fund they invest in, many are simply not saving enough.”

The average person aged 18 and over in the ASB KiwiSaver Scheme has saved around $50 per week since June 1 last year, increasing their balance by an average $2,600 – including employer and Government contributions and the scheme returns. Saving in this way,  the same 35 year old person will accumulate around $70,000 by the time they retire. This will provide a supplementary retirement income from KiwiSaver of $75 per week (around $4000 per annum) for 25 years, on top of the $349 per week from NZ Superannuation at current rates (a total of $22,100 per annum).

In total savings, this is $530,000 less than the average respondent in our survey aspired to, and only 55 percent of the aspirational annual $40,000 income.  This assumes that the respondent does not plan to significantly reduce their capital.

“It seems that while more Kiwis than ever are saving for their retirement through KiwiSaver, many of them do not yet understand the amount of money they actually need to put aside for the retirement they want. They’ve set great savings goals, but they need to save more to reach them.”

A quarter of New Zealanders also confess that they simply don’t know how much they will need for their retirement.

Women are lagging behind

According to the survey, age and gender have a significant impact on an investor’s confidence in planning and saving for retirement, and using KiwiSaver.

Women are less likely than men to be saving for retirement, less confident in their ability to make decisions regarding savings and investments, more risk averse in their decisions about their savings and investments. They are also less likely to be actively thinking about their retirement options. Men also rated their knowledge of KiwiSaver much higher than women did.

Mr Turnbull says the survey has also identified the group most at-risk in terms of retirement readiness. “They are significantly more likely to be women in families with school-aged children and who have low personal annual incomes.”  More than a third of all women surveyed were not saving for their retirement.

The primary reasons for not saving for retirement are that respondents feel they cannot afford it or they feel that they’re too young to think about it.

“The results show promising signs that KiwiSaver is having an impact on the savings habits and retirement attitudes of New Zealanders, but they also illustrate that there are groups of New Zealanders that may face a tougher time in retirement if they don’t take action soon,” Mr Turnbull says. “Motivation is one issue we have to address, but beyond that the knowledge gap is still very apparent.”

There was also an awareness that retirement savings were needed – almost half of those surveyed strongly believe the government will not provide an adequate retirement income.

The usage of KiwiSaver was 54 percent of all respondents.