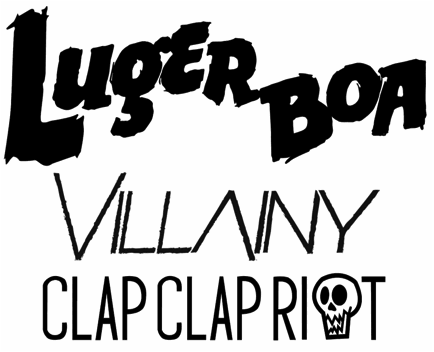 Kick Out The Jams Motherf*ckers!

In a period of smoke and mirrors, frauds and fakers, its time to prove once again that a kick arse live show chock full of great tunes and on stage insanity will always reign supreme when YOU need to get loose, crazed, and wicked.

3 of New Zealand biggest Rock n Roll acts of 2012 – Luger Boa, Villainy, and Clap Clap Riot, are hitting the road in late July for 3 shows only!

For Luger Boa, long established as one of this country’s premier live rock n roll outfits (and not to be trusted with your beer or girlfriend), the NZ dates will kick off a run of International Mayhem that will see the band head from NZ , across Australia, and through Japan in support of the international release of their wild n twisted long player ‘New Hot Nights’.   They’ll also be using these NZ dates to experiment on the willing with new material from a forth coming EP. BANZAI!

Clap Clap Riot , fresh from a blood sacrifice (for real!) at their chaotic album release show will be smashing out their superb songs ‘Everyone’s Asleep’, ‘Moss-haired Girl’, and ‘So You Say’ from their debut album ‘Counting Spins (freshly released!!!). All who have witnessed this 4 man ball of fury can testify to them being one the best live acts you will see this, or indeed any other, winter.

Villainy’s ‘Alligator Skin’ has simply been THE biggest local rock song of the year with the band proving they arestadium ready now, with supports Seether and Incubus already under their taut belts. But they must be experienced up close and personal to be believed, as they take to the traditional rock format with a razorblade and tear up the stage in a frenzy of sweet sonic hooks, raw power, and fierce resolve.