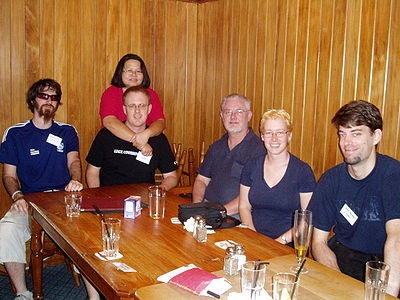 According to the New Zealand Herald National list MP Tau Henare's apology from Wikipedia was the result of changes to the websites article about him. This of course is absolute rubbish and the apology Mr Henare received was not the result of him being labelled a "carpetbagger", but in fact being mistakenly blocked by an over zealous Wikipedia editor, who operates under the alias of "Gadfium".

Wikipedia is essentially peer-reviewed opinion, and this can be a lively process . Edit wars are frequently conducted between a few extremely vociferous individuals. While dozens of editors may contribute to an article over any given period of time, it is often a much smaller number of highly opinionated editors who contribute the bulk of the edits, often redoing or removing each other's work.On Wikipedia, "fact" is established by the party with the free time that's required to wear down everyone else and exhaust them into submission. The search for truth ultimately yields to a tyranny of the uber geeks & the unemployed.

A discussion on a blog below records "Gadfiums" position

"I am the admin who performed the blocks. A user repeatedly added a slur to the article on Tau Henare with only a blog as reference. Blogs are not considered reliable sources on Wikipedia. After discussion and warnings, he continued adding the slur and other information which was not supported by the references he added, and was blocked for a week. A new account named HenareT then made edits which had some similarity, and I blocked it as being probably the same person avoided the first block."

Kia Ora folks, yes I did edit "my" page. I edited theses facts, my great grand father served from 1914 to 1938 not 48, my actuall name is Raymond Tau Henare (check birth cert) I was never involved with Mana Motuhake. I wouldn't have the faintest idea about the Union edit as I never edited anything about that. no biggie. I see they (Wikipedia) have gone back to the original error, all good, my family know their own history.
Tau

Another glaring error in the Herald article also claimed  Mr Creser listed his source as a blog posting about Mr Henare having stood for New Zealand First and Mauri Pacific before National. Wikipedia allows users to view comparisons of the various edits side by side and the references to the various political parties was clearly the result of a previous edit, which is unfortunately another example of shoddy research and journalistic lassitude at New Zealands most read newspaper.

The edit prior to Mr Creser's is here-

Tau Henare (born 29 September 1960) is a New Zealand Māori parliamentarian. He served as a Member of Parliament from 1993 to 1999 and returned to Parliament in 2005. He has been involved with four political parties: Mana Motuhake, New Zealand First, Mauri Pacific and the National Party - representing three in parliament.

On the following Wikipedia page, another-editor advises Gadfium about the content of the Herald article, which Gadfium confirms as "correct reprting".

Gadfium is actually George Stepanek , pictured above at a Wiki Conference in Auckland with a group of Wikipedia editors. He has a bio on one site , as "Gadfium"

I'm a programmer working for a large software company in Auckland, New Zealand. I'm also a part-time student at Auckland University, a Chemistry major but working on a cellular biology stage I paper for the first half of this year.My New Year's resolution is to learn Spanish. If any Spanish speaking Wikipedian living in Auckland reads this, please do drop me a note.

I've been a registered Wikipedian since May 2004, after reading about the project in a friend's LiveJournal. It didn't take long for an obsession to develop. I enjoy fixing grammar, punctuation, and spelling errors, which is what first got me hooked. Since then, I've moved back and forth among a lot of different areas: wikifying, cleaning out old vfd discussions, hitting the random page button and fixing what I can, sorting stubs into categories, and Recent Changes patrol. Now and then, I create a new article. So far, I've started 26 articles. The most unpleasant to research was Creeping eruption.

On Wikipedia he has another page as George Stepanek  as follows-

George Stepanek is a senior software developer in New Zealand. He has an M.A. from the University of Cambridge, and has gained certification as an architect in both J2EE and .NET.

George is the author of Software Project Secrets: Why Software Projects Fail [ISBN 1590595505]. This is the first book to analyse and address the conflicts between software development and project management. The book identifies ten hidden assumptions in project management that aren't valid for software projects. Agile methodologies can fix some of these problems, and the book also describes seven further techniques to help fix the rest.He lives in Oranga, a suburb of Auckland, with his cute but attention-seeking Silver Abyssinian cat, Hermes. His interests include weight training, Go, photography and travel.Noting the paucity of articles relating to weight training, he has rewritten the weight training article to featured article status, and contributed articles about Body for Life, dumbbells, barbells, the Smith machine, the cable machine, the leg press, the squat, the crunch and overtraining (amongst others).He displays his mild inclusionist tendencies by occasionally attempting to salvage articles with potential from AFD, e.g. Thursday October Christian, Delimited, Eyre legend, sugar addiction and war savings stamps. However, he prefers not to enter such debates unless he can bring new ideas to the table.

Perhaps the most telling evidence of Wikipedias revisionist minimalist policies comes from a quote on George Stepanek,s own website-