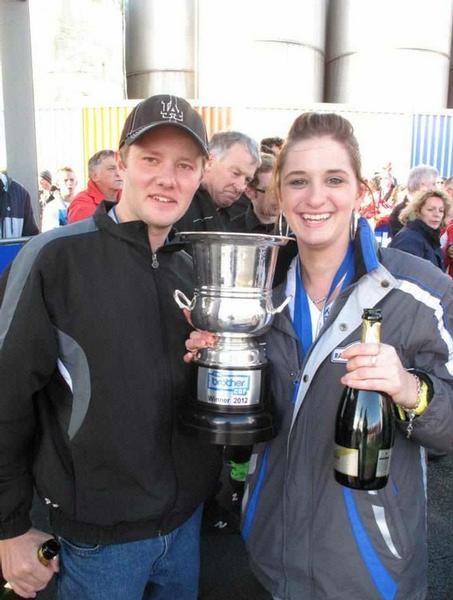 Clayton Hoy and his partner Jaimi Wall attended this weekend’s Brother Rally New Zealand and ended up winning their own rally event - The Brother Cup, a people’s rally experience in virtual rally car simulators held at the Viaduct Events Centre.

As well as winning a two-day course with the country’s best rally driving tutors, the winners were also presented with The Brother Cup trophy by.Hayden Paddon, winner of the Super 2000 World Rally Championship class, on the
official winners’ podium at the closing ceremony. As well as receiving a bottle of champagne each, Brother Rally New Zealand winner 2012 Sebastien Loeb was also on hand to congratulate them and sign their trophy.

The pros set the pace and dominated the simulator leader board early on setting some super-fast times. In the end, Matt Summerfield secured the winning time of 1.12.836 with Hayden Paddon in third place (1.15.713), and Sebastien Loeb trailing in 6th place (1.17.010). Media and celebrities also had their own Brother Cup rally going on, and the prize of three of Brother’s latest, state-of-the-art multifunction printers for a charity of their choice went to Sam Collins from More FM with a time of 1.16.986. The Auckland Blues failed to make the final leaderboard but Brenton Thornton of NZ MasterChef fame clocked up a respectable time of 1.34.518, coming in 9th.

Over 4,000 people took part in The Brother Cup and engines revved all weekend in dual simulators that replicate the NZ rally experience. The Brother Cup was a New Zealand-first for these simulators by using a rally stage and co-driver element.

“Congratulations to Clayton and Jaimi – it was an adrenaline filled final in front of a large crowd and they really did a superb job,” says Graham Walshe, executive chairman of Brother International (NZ) Limited. “The Brother Cup really added to the overall rally experience and was enjoyed by thousands, including the drivers themselves. As we’re co-driving rally in New Zealand, it was great to be able to offer stimulating and technology-focused activites for rally fans and the feedback from them has been phenomenal.”

For more information check out www.brother-rally.co.nz