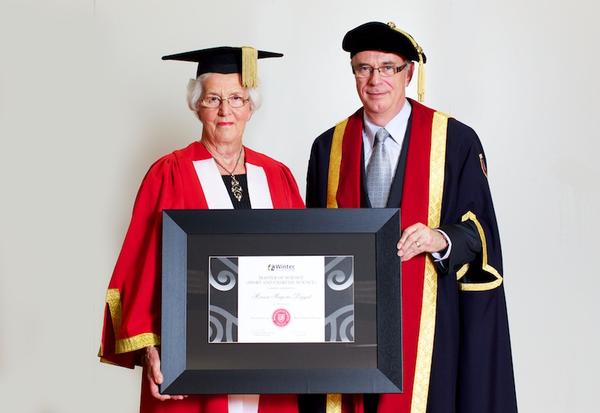 Monica Leggat is being awarded an honorary Masters of Science (Sport and Exercise Science) for her contribution to netball. CREDIT: Wintec

For more than 60 years Monica Leggat has dedicated her life to netball, earning her legendary status in netball circles and now a Masters degree.

Wintec (Waikato Institute of Technology) awarded Leggat an honorary Master of Science (Sport and Exercise Science) at a formal ceremony and dinner held at Wintec House in Hamilton last night.

Former Silver Ferns players and coaches, representatives from Netball New Zealand and Netball Waikato, Wintec honorary recipients, mayors, Wintec Council members and staff all turned out to congratulate Leggat on what is her first degree at 80 years of age.

On receiving the honour Leggat said “This is such a privilege. I’ve been very fortunate over the years and my time working for Netball New Zealand and managing the Silver Ferns was a highlight of my career. I’m delighted to be Netball Waikato’s patron and now look forward to representing Wintec in the best way possible.”

In her lifetime Leggat has shown round-the-clock commitment to fulfilling many different roles for netball in New Zealand, including managing Waikato representative sides, New Zealand age group teams and the Silver Ferns.

She also played an instrumental role in bringing Hamilton’s netball venue Minogue Park to life and was ‘the voice’ of Minogue Park for many years. Nearly 40 years on Leggat is still involved with Netball Waikato as its patron.

This honorary Masters adds to Leggat’s already impressive list of accolades. In 1999 Leggat was awarded a Member of the New Zealand Order of Merit (MNZM) for services to netball and the community. In 2003 she received the Halberg Trust Service to Sport award and last year she was awarded the New Zealand Sport and Recreation Lifetime Achievement award.

Wintec's honorary recipients must have made a significant contribution to Wintec, the region or the nation over a number of years through innovation in industry or business, scholarship and research, or enhancing New Zealand society.

Honorary fellows and degrees are approved by the Wintec Council following recommendations made by the Honorary Degree Nominations Committee which annually review honorary nominations from Wintec staff.