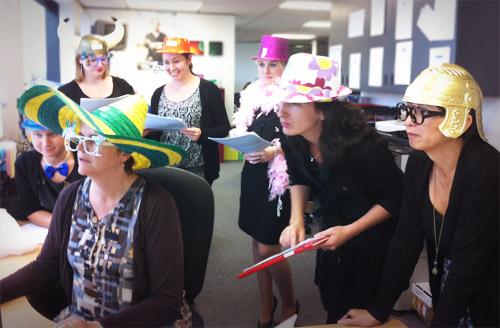 Where did you get that hat? MediaWorks' Finance team gets on with the serious task of testing their new Greentree system. CREDIT: MediaWorks

TV shows succeed by creating and keeping an audience. Through total staff involvement and a determination to have some fun, broadcaster MediaWorks showed how a new computer system should be produced.

The day that MediaWorks’ new Greentree system was switched on, project manager Michelle Mullins climbed on the desks of the Finance department, strung up fairy lights and raised a banner proclaiming ‘Greentree Go Live Zone’.

Not an orthodox approach – and the rest of the Finance team were gobsmacked.

“What the hell are you doing, woman?” asked Shae Morris of Accounts Payable. “It’s not Christmas yet!”

“They thought I’d had vodka for breakfast!” Michelle laughs.

The party didn’t stop there either – the testing day that followed was marked with the donning of silly hats (see picture), helping to lighten the load in what is generally a tedious process.

“THIS IS OUR SYSTEM”

For MediaWorks, owners of television channels TV3 and Four, as well as dozens of radio stations throughout New Zealand (including More FM and Radio Live), having fun was key to a smooth and successful Greentree implementation. When the time came to switch on, it was also time to celebrate a genuine sense of achievement.

“It was all about buy-in and creating some enthusiasm,” says Michelle, who’s also the Finance Manager of the television arm, TVWorks.

It was the culmination of some seven months of intensive work by Michelle, the dozen or so core users of the system in the Finance department, and the Greentree implementation Partner.

From the outset, those who would be using the system were actively involved in the Greentree implementation. As the functions of the new system were sketched out, Finance staff were brought into the planning sessions to advise on their specific tasks.

“Right from the beginning we wanted to say ‘This is your system as well as our system’,” Michelle says. “We’d be constantly having conversations about it because they were just as amped up about it as I was. I think the enthusiasm was infectious.”

The most tangible evidence of this enthusiasm was the “paper wall” in the Finance department, started by Michelle to generate feedback and ideas. This “Old School” approach provided the sort of visibility and interest that’s unlikely to occur in an email trail. People were encouraged to write on it, sharing their thoughts about the new system.

“I wanted something that everybody could see, and it meant that when one person went to write something, somebody else would respond as well,” she says.

It also meant that Partner consultant Megan Cunningham-Adams had something to check each time she came visiting, enabling her to respond instantly to queries.

“You can tell that things are not going well with an implementation, when a customer starts saying ‘Your system...’,” Megan says. “This never happened at MediaWorks – it was always ‘Our system’.”

The project’s success was recognised by being named Implementation of the Year in the Greentree we3 Awards. Megan rates it the best she’s ever done.

The Financial team are delighted with their new system. They took a moment to reflect on what they’d done, and they were all smiling.

Shae Morris: “Because it was all so well planned at the beginning we had less to be afraid of at the end.”

Paula Usal (Accountant): “We knew the whole way through, where we were at and what was expected – that was what made it so easy.”

Noelle Browne (Accountant): “It’s a big achievement, to be able to work together as a team like that and get the results.”

Angela Rainbow (Accounts Receivable/Credit Control): “You know you’re not in it alone and it’s not a huge mountain. You know everybody is on board with you and there to help you.”

The last word, however, belongs to Michelle Mullins.

“The other departments didn’t actually notice that we’d changed. There was no bottleneck for payments; there were no excuses that we couldn’t do something because we were implementing a new system. The service we’d always given was still there, even though we were heavily focused on putting in Greentree.

“Really, it couldn’t have worked better.”