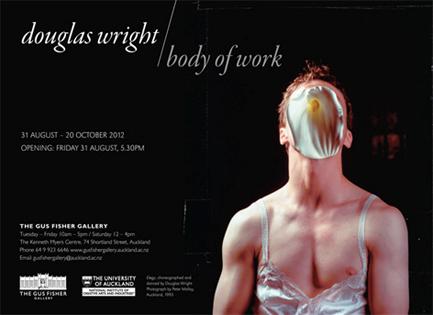 The work of one of the country’s best known dancers and choreographers will be profiled later this month in a retrospective show at Auckland’s Gus Fisher Gallery.

The exhibition Douglas Wright: Body of Work highlights Wright’s extraordinary creative output through his 30-year career. Regarded as one of New Zealand’s most visionary artists, Wright has created more than 40 dance-theatre works. Many of these have explored what it is to be human, the depths of the human spirit, and our ongoing relationships with life and death.

Also on show, in a domestic setting evocative of Wright’s home, are his choreographic workbooks; paintings, sculptures, small installations and drawings, the making of which Wright describes as miniature gestural choreography. Included also are memoirs and drafts of Wright’s poems that echo the text of his workbooks – vivid metaphors that give rise to the dances that imprint themselves onto the minds of their audiences long after the curtain has closed.

Wright began dancing with Limbs Dance Company in 1980 and quickly established himself as an important choreographer with works such as Gloria and Forever (made for the Douglas Wright Dance Company). He is also an acclaimed writer: his first book Ghost Dance (part memoir, part love story) won the E.H. McCormick Best First Book of Non-Fiction in 2000 and is included in Fifty Gay and Lesbian Books Everybody Must Read. In 2000, he was chosen as one of five inaugural Arts Foundation of New Zealand Laureates. His most recent production 'rapt' was presented at the 2011 Auckland Festival. Wright has been invited to perform this work at The Hague, Holland, in 2013.

Audiences to Wright’s performances typically find themselves precariously poised at the edge of their emotions. Fleeting images are at once terrifying and exquisitely beautiful and, though ephemeral by nature, their profundity endures – so much so that when Wright’s dance-theatre work Forever premiered in Switzerland, it was hailed as “an overwhelming contemporary contribution to the history of our life and times.”

Douglas Wright: Body of Work opens at 5.30pm at the Gus Fisher Gallery on Friday 31 August and runs until 20 October. It is presented in association with the Tempo Dance Festival 2012 and Dance Studies at The University of Auckland.